After an attempted ban on exhaust-blown diffusers for 2012, Formula 1 teams rocked up to the season opener with a workaround solution to get the same effect – the Coanda exhaust. Here’s how they came to be, and how they worked…

In the lead up to the 2012 Formula 1 season, the FIA had made numerous changes to fight against the growing trend of using the exhaust to affect the car’s aerodynamic output.

This had followed the ban on double diffusers, which had subsequently been enhanced in their second year by the use of exhaust blowing solutions – which the FIA also made an attempt at stopping.

As explained in the previous edition of Banned, the clampdown wasn’t effective – arguably, the tighter restrictions actually led to more teams developing their own exhaust-blowing solutions. With particularly stringent dimensional criteria being put in place for 2012, the FIA intended to stop the practice altogether.

However, with blown floors being such a good avenue for increasing car performance, designers were not going to sit back and let any opportunity pass them by. 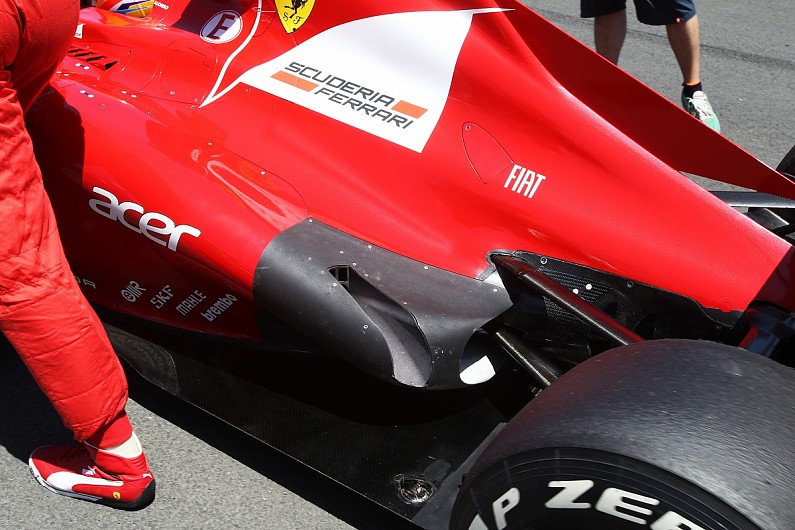 At its core, the Coanda effect is the phenomenon where a jet of fluid can attach to a curved surface and follow it around, developing a low-pressure region.

By being able to use that effect, F1 teams could use the car’s bodywork to coax the exhaust gases down to the floor and create the exhaust-blown diffuser in that manner.

F1’s Technical Working Group (TWG) meetings, in which the teams’ technical directors would negotiate with the FIA over the direction of the new regulations, featured attempts from both Red Bull and McLaren to manoeuvre the exhausts – having both experienced the effect in the windtunnel – into a position in which they wanted.

“At McLaren we brought our first exhaust blowing solution in 2010, and it didn’t work! So we did a load of R&D to work out what the hell was going on, and we found the exhaust had gone the wrong way and we’d found out about an effect called Coanda” Paddy Lowe

“There were quite a few constraints on that part for 2012 with the [engine] maps,” explains then-McLaren technical director Paddy Lowe, “but I think they’d realised that it was all very difficult with maps, so the final solution was going to be geometric, or physical in the sense of the tailpipes.

“There’s quite an interesting story around this. At McLaren we brought our first exhaust blowing solution in 2010, and it didn’t work! We launched this new floor in Silverstone and didn’t get the downforce.

“So we did a whole load of R&D to work out what the hell was going on, and we found out that the exhaust had gone the wrong way and we’d found out about an effect called Coanda.

“When we jump ahead to Hungary in 2011, when the FIA were trying to impose a final solution on exhaust positioning, there were a lot of people trying to negotiate what these constraints would actually be and putting the exhausts up high and things like that, and there was a constraint on angle. 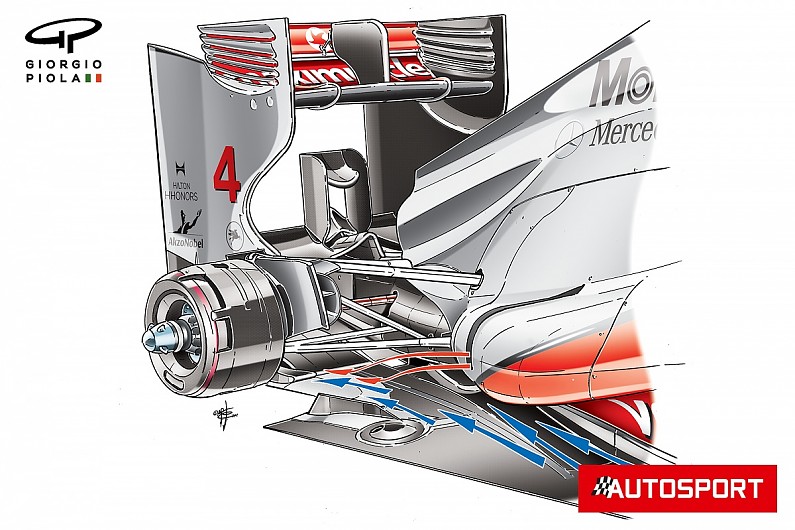 “So bartering around that, we settled on it pointing up between 10 and 30 degrees. And we had this phone conference with all of the team technical directors, effectively the TWG on the phone, and I was texting Paul Monaghan, my opposite number at Red Bull, because we both knew about Coanda and we already had in mind that we would get around this.

“So we were trying to stop them pointing it up too much, and we got a number agreed that was really tough but we felt we were given the challenge. So when we came out with the 2012 car, we got all of this Coanda working really well, and we were ahead of the game.

“Because we put in a lot of work in 2010 trying to not have Coanda, we knew the score and we developed the tools that helped us reproduce these effects in the windtunnel.”

McLaren’s solution was most widely adopted for 2012, extending the rear of the sidepods outwards to help the exhaust plume to produce the Coanda effect.

The jet of exhaust gas expelled from the engine pulled nearby airflow towards it, ensuring it took the desired path to the gap between the tyre’s sidewall and the diffuser’s outer wall, just as it was with the exhaust blown diffuser solutions used in 2011.

The critical thinking behind the design of the McLaren solution was that with the exhaust mounted in a pod that overhung the sidepod, airflow would still flow around the sidepod and into the ‘coke-bottle’ region.

This was a key issue that the users of a ‘ramp’ solution, such as Sauber, had to wrestle with. The exhaust gases would mix with the flow ordinarily destined for the coke-bottle region – diluting the effect of both.

Red Bull, however, wanted a solution that brought the best of both worlds. This was a more complex prospect and needed a tunnel to help the two effects cross over. This would not come without its complications though, as the team grappled with trying to make it work in the real world after simulations offered some promising potential.

So convinced was Red Bull that it was onto something special, it actually ran a benign exhaust solution through the course of pre-season testing in an effort to delay anyone being able to copy its arrangement. 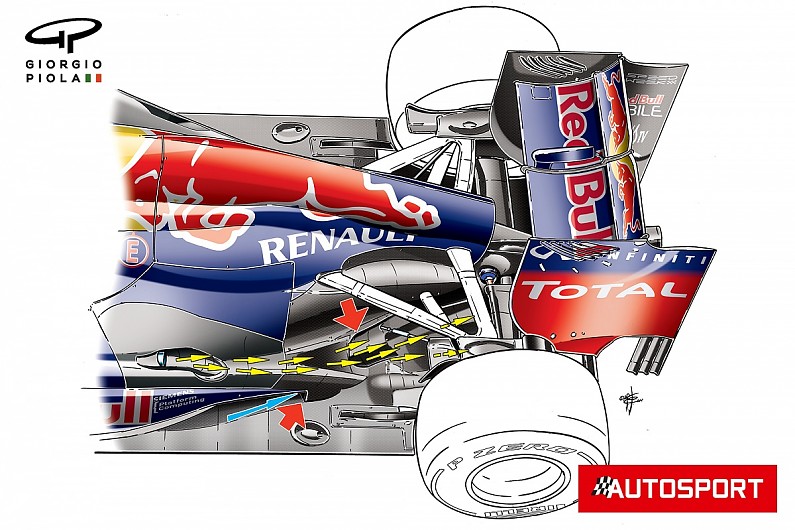 It finally unveiled its crossover ramp solution on the penultimate day of testing, and duly came up against issues, as it suddenly found it had flow instability with the tunnel that made the car inconsistent on turn-in, but the team continued its development.

The regulatory changes for 2012 not only had an impact on the position of the exhaust but also the surrounding bodywork. As such, many of the designs seen up and down the grid that used this Coanda-style solution had bodywork with a trough-like appearance.

This was bounded by the new regulations and most opted for a simple letterbox-style trough. However, Red Bull pursued numerous ways of manipulating this shape to influence the trajectory of the exhaust plume and tried different solutions, some of which hoped to manipulate flow into the tunnel beneath.

For the Chinese Grand Prix, Sebastian Vettel even reverted to the pre-season testing solution, as he not only felt it might arrest some of the issues he was having with the car but also help the team understand where those issues might lie.

The tinkering continued, now with a renewed effort being made to reshape the crossover tunnel’s entrance in order to smooth the passage of airflow into the tunnel and beyond. This meant a total redesign of the sidepod, including the movement of the exhaust tailpipe. There was also a lengthening of the tunnel, the shape of the tunnel’s entrance being enlarged and a vertical separating slot mounted within.

At this point it appeared that the team had finally got on top of its aerodynamic instability issues and the car behaved more predictably, meaning it could now hunt for extra performance. This would come from a continued push to refine the crossover tunnels and bodywork that surrounded the exhaust’s shape and a renewed effort by Renault to find ways to stabilise the exhaust flow. 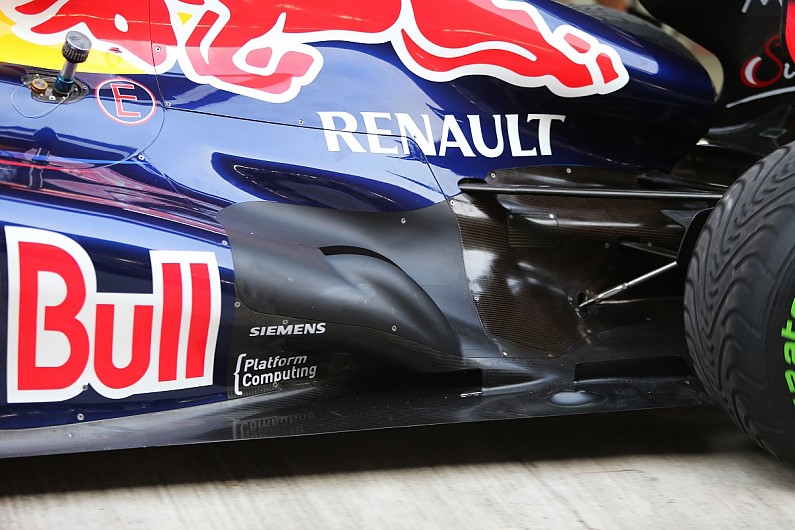 Meanwhile, the team had worked out that the plume created by the exhaust’s shape, itself mandated by the new regulations, was having a detrimental effect. In order to soften a damaging vortex that was being formed, it worked on using a Helmholtz resonance chamber – a noise control device that absorbs any excess energy – to minimise the amount of drone inside. Doing that, Red Bull was able to essentially damp the exhaust to create a more even distribution of exhaust gases.

The amount of work done by Red Bull during 2012 to make its solutions work was monumental, but that’s not to say others on the grid were resting on their laurels either.

Sauber, which did not have the luxury of being able to bring new parts to every race and had started with the ramped solution, had a brief dalliance with the crossover solution before realising the amount of development that would be needed to make it work. As such, it switched to a McLaren-style Coanda solution during the season instead.

Ferrari remained an outlier throughout, preferring to try and modify its ‘Acer’ duct solution on an ad-hoc basis while it worked out the best way to maximise the Coanda solution that it finally introduced.

The FIA let the use of these Coanda style exhausts slide for 2013 knowing the financial burden that teams had gone through to develop them. It was acutely aware that with the new hybrid rules coming into play for 2014, the ability to blow the diffuser with the exhaust would no longer be viable.

So, while it was never specifically banned by a target new rule, the regulations were altered to account for it. With the exhaust having to exit along the car’s centreline going forward, the days of blown floors were over. 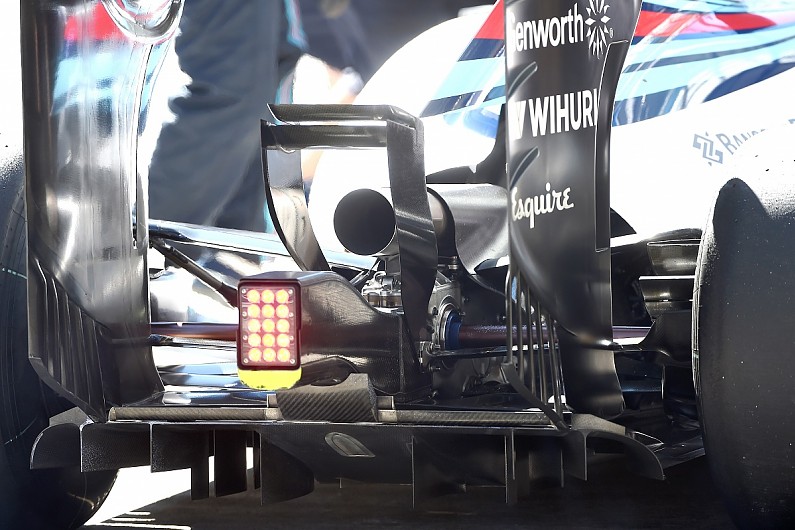