Max Verstappen has secured his first pole position of the 2020 Formula 1 season for the Abu Dhabi Grand Prix. Here’s how and when you can watch the race.

The Red Bull driver pipped both Mercedes drivers Valtteri Bottas and Lewis Hamilton to take the final pole of the season, marking just the second time neither Mercedes will start from top spot this year.

Bottas edged out his team-mate to complete the front row next to Verstappen, with the reigning F1 world champion making his comeback since recovering from COVID-19 which ruled him out of last weekend’s Sakhir GP.

After qualifying, Hamilton admitted he’s “not 100%” after being “bed-ridden” due to the virus last week but was pleased to return to action for Mercedes.

McLaren’s Lando Norris produced one of the standout performances of qualifying in Abu Dhabi, by taking fourth place and only missing out on Verstappen’s pole time by 0.251 seconds – much to the British driver’s own surprise.

Norris nipped ahead of the under pressure Alexander Albon who could only qualify in fifth for Red Bull, 0.325s off his pole-sitting team-mate, with Carlos Sainz Jr slotting into sixth place ahead of his final race for McLaren.

Daniil Kvyat also impressed with seventh place on what is widely expected to be his final outing for AlphaTauri.

Charles Leclerc qualified ninth but will start the Abu Dhabi GP from 12th for Ferrari due to a grid penalty picked up at the last race, while both Sergio Perez (Racing Point) and Kevin Magnussen (Haas) will make up the back row due to respective engine grid penalties. 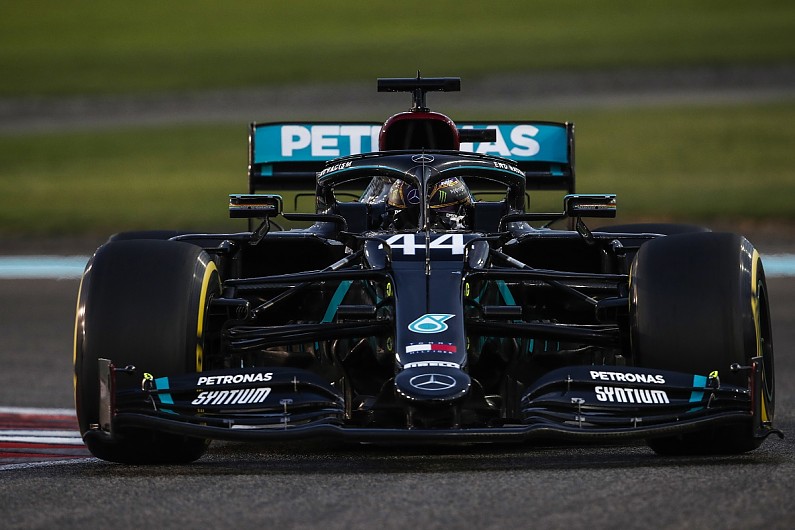 Will fans be allowed at the Abu Dhabi GP?

Fans will not be allowed to attend the Abu Dhabi GP, with the Yas Island going into a ‘biosphere’ bubble which will only include F1 personnel, circuit officials and hotel workers in the area. The strict lockdown is part of the United Arab Emirates COVID-19 measures.

When is the F1 Abu Dhabi Grand Prix?

How can I watch the Abu Dhabi GP?

In the United Kingdom, Sky Sports has exclusive live broadcasting rights (excluding the British GP), with the Abu Dhabi GP race shown live on Sky Sports F1. Pre-race coverage will be starting at 11:30am GMT ahead of the race start at 1:10pm GMT.

Channel 4 will be showing extended highlights of the race on Sunday evening, starting at 5:30pm GMT.

Autosport is running a live text commentary for the Abu Dhabi GP.

Current weather forecasts predict mostly clear conditions, and the possibility of moderate winds in the late afternoon, but with a very small chance of rain at the Yas Marina Circuit on race day. The temperature is expected to be 24 degrees Celsius for the start of the race – the same conditions as qualifying.

How many laps is the Abu Dhabi GP?

The race is scheduled to complete 55 laps of the Yas Marina Circuit, covering a total race distance of 305.355km.