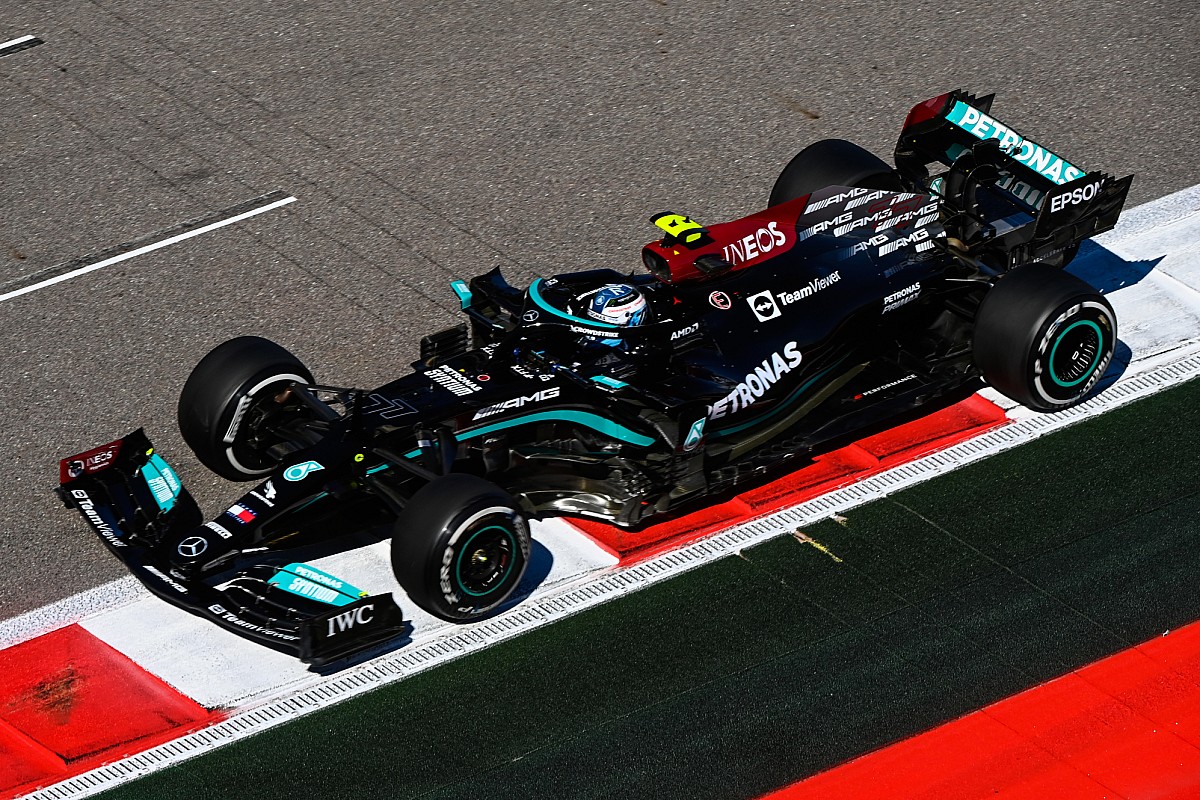 Bottas was fastest in both FP1 and FP2, twice beating his reigning world champion Mercedes teammate Lewis Hamilton around a track where he’s always excelled.

What happened in Free Practice 1?

Red Bull’s Max Verstappen set the benchmark fastest time on soft-compound tyres at 1m35.616s just before the halfway point, quickly beaten by Bottas on 1m34.427s – which remained as the fastest time of the session.

Hamilton got within 0.211s of Bottas on his first flying lap on the softs. Verstappen went again near the end on fresh softs, lowering his time to 1m34.654s by setting the fastest middle sector, just 0.016s slower than Hamilton overall.

Charles Leclerc was best of the rest for Ferrari, 0.690s off the pace, ahead of Sebastian Vettel (Aston Martin), Pierre Gasly (AlphaTauri), Carlos Sainz (Ferrari) and Lando Norris (McLaren). Norris suffered a bizarre incident when he half spun as he returned to the pits.

Sergio Perez was ninth in the second Red Bull, with Fernando Alonso’s Alpine rounding out the top 10.

What happened in Free Practice 2?

In FP2, Leclerc set the initial soft-tyre pace, beating his morning time with 1m34.925s, while the frontrunners lapped on mediums from the start. Alonso topped his fastest lap with 1m34.762s after 15 minutes.

Hamilton mowed down his front jack man in a practice pitstop, apologizing and admitting that his ‘brake magic’ button – which puts almost all the brake bias to the front wheels – was engaged by mistake.

Bottas lapped in 1m33.593s, taking over P1 a second clear of Verstappen – who will start from the back of the grid on Sunday after taking a new power unit, and therefore was unlikely to be doing any low-fuel runs. Hamilton then took P2, 0.044s off his teammate, with Norris rising to third, half a second off the Mercs.

Gasly then took third, getting to within a quarter of a second of the Mercedes duo, just before a red flag for Antonio Giovinazzi, who spun his Alfa Romeo into the wall at Turn 9. Leclerc had previously suffered a spin there without hitting anything.

Gasly lost his front wing in the closing moments of the session after smashing it against the kerb at Turn 2.