The seven-time F1 champion scored his third win of the year at Sunday’s Spanish Grand Prix to extend his lead at the top of the F1 drivers’ championship, pulling off an audacious two-stop strategy to beat Red Bull rival Max Verstappen.

Hamilton dropped behind Bottas into third place after making his second pitstop, but Mercedes gave Bottas the call to not hold his team-mate up as they were on different strategies.

The switch took place at Turn 10, but Bottas did not appear to give Hamilton an overly wide berth, initially hanging his Mercedes car around the outside before slipping behind into third.

Bottas said after the race that he could have let Hamilton past sooner, but did not want lose too much time as he was trying to open up the gap to Ferrari’s Charles Leclerc in fourth place so he could take a free pitstop to go for the fastest lap.

“I definitely could have let him by earlier,” Bottas said.

“But I was doing my own race as well, so I was always calculating things. I was trying to get Charles off the pit window so I could stop again and try and go for an extra point. The main thing in my mind was my own race.

“They told me not to hold him up too much, but like I said, I was also doing my race. I’m not here to let people by, I’m here to race.”

Hamilton revealed that he was not aware Bottas had been given a call to not hold him up, but had no issues with how the switch happened at Turn 10.

“Honestly I didn’t know that he had a message, so in my mind, I was like, we’re racing, and that’s totally fine for me, particularly early on in this part of the season,” Hamilton said. 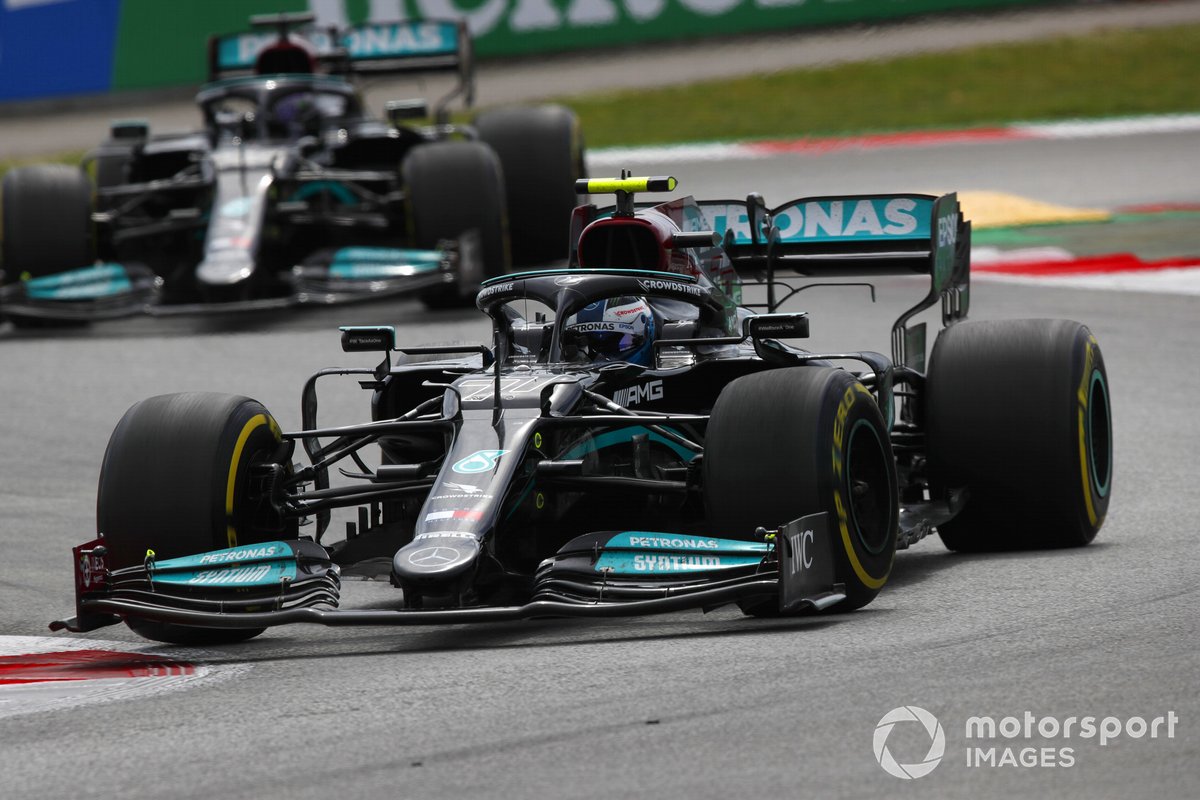 “In my mind I was like OK, I’ve got to get close, and go for an overtake. But then obviously when we went into Turn 10, we were on massively different strategies, so I was going to get him at some stage because I had much better tyres.

“We were going into Turn 10, and I thought there was a gap there, and I wasn’t quite sure, and then there was a gap, and Valtteri was completely fair. I hope I didn’t lose him too much time.”

Mercedes team principal Toto Wolff said he could understand why Bottas would have felt frustrated in giving up the place, but had no concerns as it did not impact on the team’s final result.

“Racing drivers, their instincts are what they are,” Wolff said.

“I would have wished that maybe, because Lewis was on a totally different strategy, it would have come a bit quicker.

“But in the end we scored the result, and I can relate to Valtteri that he had a tough day again, that you’re annoyed.

“If it would have lost us the race, I would have been more critical, but at the end, it’s something we can learn off.

“It goes both directions, and this is what we will be discussing, but in a very camaraderie-like way.”