Hamilton: Winning eighth F1 title or not in 2021 won't decide my future The seven-time world champion is entering his 15th F1 season this year and his ninth with the Mercedes squad.

But after he signed a one-year contract extension with the team for 2021, which Hamilton said at the launch of the Mercedes W12 was because of “no real need necessarily to plan too far ahead in the future”, the short length of Hamilton’s new deal has led to speculation that he could still step away from F1 after securing what would be an eighth title.

When asked about the possibility of stepping away at that point or planning to return if he didn’t win the 2021 title and take the record he currently shares with Michael Schumacher for himself, Hamilton said: “I have made a real important decision in my mind, [which] is that I don’t want that to be the deciding factor.

“I got into racing because I loved racing and I think that has got to be always at the core of what I do.

“If I don’t love racing and if all you are going for is accolades and world titles I feel I could potentially lose my way.

“Of course, it is the ultimate dream, but I don’t think necessarily it will be the deciding factor for if I stay on and keep going.

“I think it is more when I put that helmet on, I still have that smile when I leave the garage. It is going back to ‘do you enjoy it?

“Last year was a really tough year for everybody, including me, but there were still some impactful moments.

“Will that be the case this year? We shall see. Will I enjoy it as much? We’ll see. I’m excited now so I’m sure I will.” 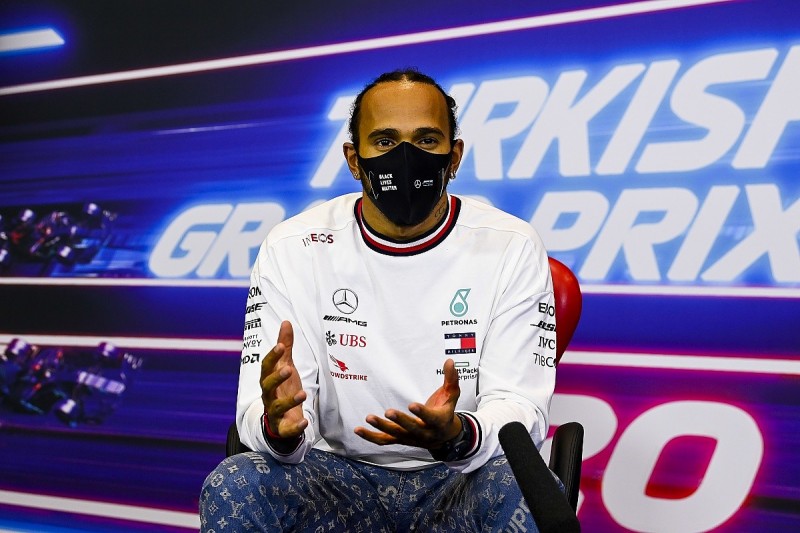 PLUS: Can Mercedes’ W12 retain the team’s crown

Hamilton, who was speaking in a press conference that followed Mercedes virtual W12 launch event, also said that he was “fully invested in this season and in delivering”, after suggesting at the car’s launch that discussions over his future would include considerations about “if we want to do more [years together at Mercedes]”.

He added: “I still love what I do.

“I think, going back to [what I said] earlier on, I’m just generally in a fortunate position that I don’t have to commit to multiple years.

“So, I chose to have a one-year deal so that I could see how the year goes and where we’re at mid-year or towards the end of the year – who knows whether we’ll still be in a pandemic.

“But it doesn’t mean I’m not committed, I’m still very committed to the sport.

“There was a lot of great discussion around this diversity issue and it still remains an issue to this day and it’s not going to change overnight.

“But what’s really important is to make sure we’re actually delivering and actually taking action.

“And I’m really proud of my team here, who I’m already seeing steps that we started taking last year, particularly towards the end of last year.

“We’re starting to see that progress little by little, and it just takes one step at a time of course.

“So, that’s kind of my driving force this year too. To make sure that we continue to push for accountability and on top of that hopefully I can deliver some good performances.”