In the opening laps at the Algarve, Sainz was able to take advantage of a track made slippery by rain and also by the fact that he was on soft tyres, while the Mercedes duo and Charles Leclerc’s Ferrari were on mediums.

Sainz launched from seventh on the grid to move up to the podium places on the opening lap, before passing Valtteri Bottas for the lead on the second tour.

He remained in front until Bottas re-passed him on lap six, with Sainz eventually finished sixth, while team-mate Lando Norris was out of the points in 13th after a costly tangle with Lance Stroll.

“Obviously it gave some nice pictures, which we will put up at home for additional motivation in order to keep us going towards the goal we all have to get back to the front end in F1 in the coming years,” Seidl said.

“So that gave a nice taste, and it was good to see, to have some leading laps.

“But at the same time it was also clear that we had to focus on our own race, or the race which we were in. And so we were quickly back then in the fight where we belong.

“But was interesting to see. We know from Carlos and Lando, they like these conditions also.

“Of course, we had an advantage with the soft tyres compared to the guys on the medium tyres, to Mercedes and Charles. 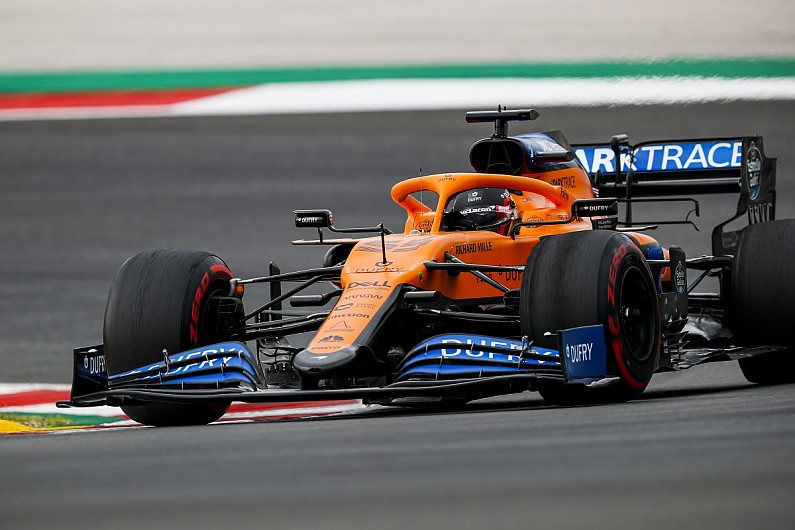 “But compared to Verstappen, who was also on soft tyres, Carlos put up a good show, and could actually put in a nice gap within some laps. But then we were quickly back to reality.”

Tyre graining proved to be a handicap for McLaren during the race, but Seidl says the latest updates continued to bring performance to the car.

“Overall, I was quite happy with how the weekend went after Nurburgring,” he noted.

“I think we started with a solid car configuration with the new nosebox and aero concept on Friday. We tested some more updates during Friday, which we plan to introduce from Imola onwards, after seeing the positive results.

“And then also for the rest of the weekend, I think we had a competitive car, which was good, which was another confirmation that we have a car to fight for this P3 in the championship.

“But in the end, it will be down to reliability, to maximising the races and making sure you see the chequered flag with both cars. This will decide who in the end will finish in P3.”