FIA race director Michael Masi has defended Formula 1’s regulatory and judicial system after Lewis Hamilton suggested the stewards “are trying to stop me” with penalties.

Hamilton was given two five-second penalties in the Russian Grand Prix for making two pre-race practice starts in the wrong place, and after serving the penalty he dropped to third place behind Mercedes team-mate Valtteri Bottas and Red Bull’s Max Verstappen.

The sanction originally also included two penalty points, which would have put him on 10 for the current 12-month period, and vulnerable to a one-race ban if he received two more points over the next four races.

However, the penalty points were subsequently rescinded and replaced with a €25,000 fine for Mercedes instead, meaning Hamilton has dropped back to eight for the 12-month period.

Hamilton also had a brush with the stewards earlier in the Russian GP weekend when he was one of several drivers called up over failing to rejoin the track in the prescribed run-off after going off the track at Turn 2 in qualifying, resulting in the world champion having the lap time deleted.

Two races ago Hamilton received a 10-second stop-and-go penalty in the Italian GP for entering the pitlane just after race control had declared it closed.

Asked if he thought the Sochi penalty was excessive, he said: “Of course it is. But it’s to be expected. They’re trying to stop me, aren’t they?

“But it’s OK. I just need to keep my head down and stay focused, and we’ll see what happens.” 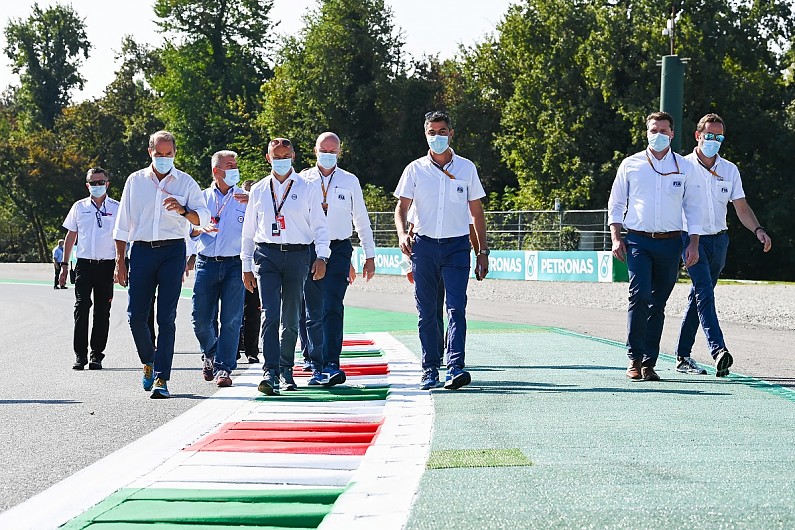 Told about Hamilton’s comments Masi said that he is always available if a driver has an issue he wants to discuss.

“From my perspective it’s very simple,” said Masi. “If Lewis wants to raise something, as I have said to him before, and said to all the drivers numerous times, the door is always open, and I’m more than happy to discuss anything.

“But I think from an FIA perspective, we are there as a sporting regulator, to administer the regulations.

“We have the stewards as an independent judiciary to adjudicate those, and therefore there was an infringement and it doesn’t matter if it was Lewis Hamilton or any other one of the 19 drivers. If a breach has occurred of the regulations, they will consider it on its merits.

“And also further to that, I would say, adjudicate it equitably and fairly in the circumstances, taking all the key elements into account.”