Verstappen dominated the race after taking the lead from title rival Lewis Hamilton during the pitstops. The Dutchman looked on course for a certain win until his left-rear tyre failed with five laps ago and he suffered a massive shunt on Baku’s long start-finish straight.

Verstappen was the second driver to have a left-rear medium tyre fail, with Aston Martin’s Lance Stroll subjected to a similar fate earlier in the race.

Speaking straight after the race Verstappen said he was “pissed off” because of what happened, suggesting that Pirelli would blame debris for the two blowouts rather than take responsibility.

“I didn’t feel anything up until the moment that I suddenly went to the right, the tyre just blew off the rim and it’s not a nice impact to have, it’s quite a dangerous place to have a tyre blowout at that speed,” he told TV crews.

“For sure [there will be talks with Pirelli] but we know the result from that conversation already and that’s a bit hard to accept.

“It will be related to debris, it’s like that. I’m sure there will be talks, Pirelli isn’t happy with what happened here today, but it doesn’t change anything to the race and the result I got here.”

“Of course I’m pissed off because of what happened today. It was a fairly easy race for me. 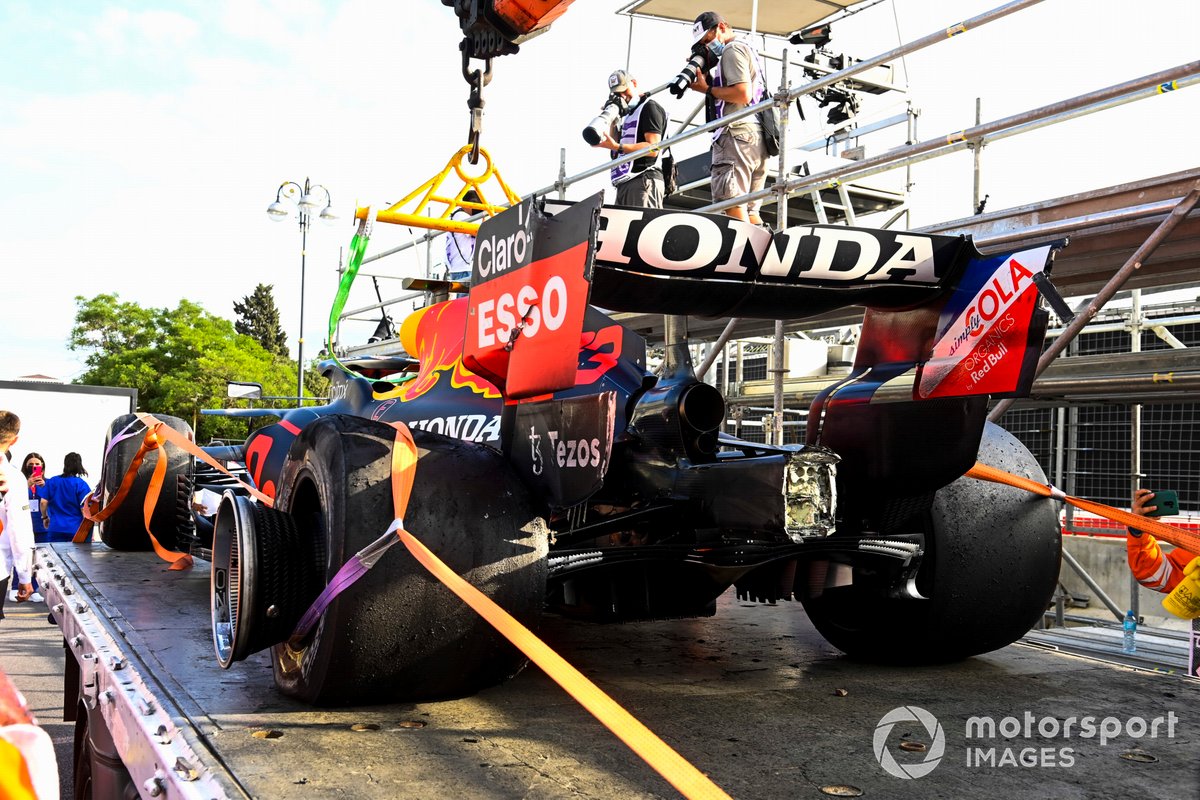 Damage on the car of Max Verstappen, Red Bull Racing RB16B after retiring

“Sometimes this sport is very harsh when things like this happen, it’s shit.”

Verstappen, who also suffered a tyre failure at Imola’s Emilia Romagna Grand Prix, said he doubted debris could have been a factor given that cars were following the same line every lap to get a tow from the car in front, and explained he didn’t wear out the tyres too much.

“I don’t think so, I wasn’t stressing the tyres. It felt comfortable and I didn’t feel any vibrations before it let go,” he explained.

“[Debris] is difficult. We’re doing the same line every lap because everyone wants to be in the slipstream. It’s very weird that it happens to me.

“I think they cleaned the track [after the Stroll crash] but Pirelli is probably going to say it was carbon debris on track.

“It was like that in Imola, so that’s something you can’t say anything about. The fact is another tyre exploded, not only for me but also for Stroll.

“It’s very frustrating, with a bit of luck we’re still in the lead of the championship but the gap could have been much bigger and that was much more important.”