Bottas: Nothing unfair about Hamilton strategy divergence at Imola Valtteri Bottas insists there was nothing unfair about Mercedes allowing Lewis Hamilton to run a different strategy and overcut him to win the Formula 1 Emilia Romagna Grand Prix.

The Finn had led the opening phase of the race at Imola on Sunday, but was pitted in response to the pursuing Max Verstappen moving first to change tyres.

While Bottas had to cover Verstappen to avoid getting undercut, Hamilton asked to stay out and extended his stint on the medium tyres by a further 11 laps.

His strong pace, combined with damage to Bottas’s floor after striking debris that cost him an estimated 50 points of downforce and a brief Virtual Safety Car period that minimised his time loss in the pits meant Hamilton rejoined ahead of Bottas after his stop.

Hamilton’s green light to run a different strategy appeared to be in contrast to recent decisions where Bottas was not allowed to take different tyre compounds in his duels with the world championship leader.

PLUS: Would Hamilton have won at Imola without VSC fortune?

But Bottas is clear that what happened at Imola was above board, and that the team had been clear that, in fighting Verstappen, the Mercedes drivers would likely diverge on strategy.

“It was two different scenarios, I would say,” Bottas said.

“We went through the plans [on race] morning, and what happens if one of us gets under pressure and there’s a possibility that Red Bull could undercut. 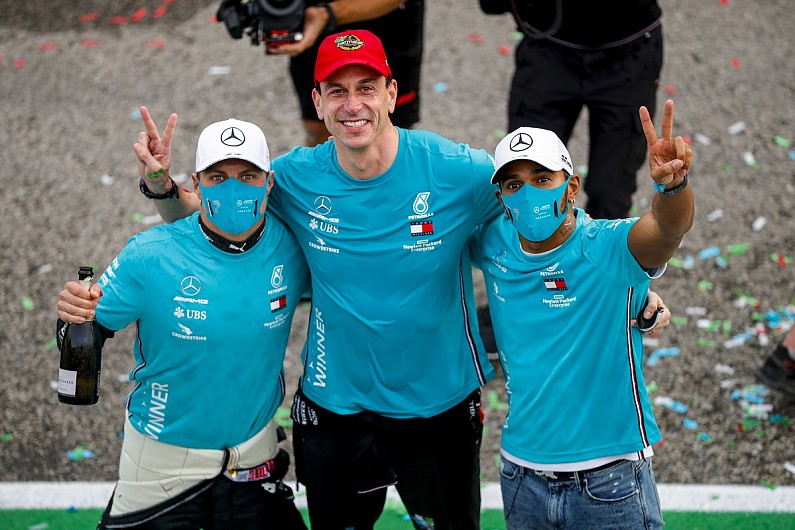 “That was me, so obviously I had to react and it would have been the same case if I was in Lewis’s position. The only thing I would want to do is to go long and seek the opportunities.

“It really paid off for Lewis and, if we were the other way round, it would have been the same for me.”

Although the VSC guaranteed Hamilton could jump both Bottas and Verstappen, Mercedes track engineering director Andrew Shovlin said it would have been “extremely close” without it.

“But the problem is you’re dropping him out on hard tyres and they have got a warm-up curve, and that means that they’re down by a second or a second and a half.

“While he looked like he could build it, we didn’t really want to sort of have him dropping into that fight with Valtteri and Max on cold tyres if we could actually get the gap.

“So he was sort of getting towards having it, and then obviously the VSC came out which just made it quite an easy situation for him to deal with.”