F1 70th Anniversary GP: What time does the race start, how to watch & more Valtteri Bottas starts on pole ahead of Mercedes team-mate Lewis Hamilton looking to fight back in the Formula 1 title tussle. Here’s how and when you can watch the race.

Fresh from signing his new Mercedes F1 contract for 2021, Bottas ended Hamilton’s run of three consecutive pole positions with a stunning last lap in qualifying as the Mercedes duo dominated the field once again.

Bottas, who suffered a cruelly timed tyre puncture in the British GP dropping him from second place to out of the points last weekend, will be looking to claw back against the 30-point advantage Hamilton holds in the current F1 drivers’ standings.

Racing Point stand-in Nico Hulkenberg stunned to take third place in qualifying, ahead of Red Bull’s Max Verstappen who will be the only driver in the top 10 to start the race on the hard tyres with the Dutch driver looking to attack on the alternate strategy.

Daniel Ricciardo carried his encouraging practice pace into qualifying to take fifth on the grid for Renault ahead of Racing Point’s Lance Stroll, while the Silverstone-based team remains in the spotlight following the multiple appeals on the FIA’s decision over the brake duct design controversy.

After taking fresh power units for both drivers after Sebastian Vettel’s failure in FP2, Ferrari’s poor start to 2020 continued with Charles Leclerc qualifying down in eighth place while his German team-mate missed out on Q3 entirely – leading to Leclerc admitting its qualifying pace was a “realistic picture”.

Further back Esteban Ocon picked up a three-place grid drop for impeding George Russell in Q1, meaning the Renault driver will start the 70th Anniversary GP in 14th place.

F1 is celebrating its 70th birthday of world championship grand prix racing at Silverstone this weekend, with the British circuit hosting the second part of its back-to-back races before the paddock heads to Barcelona for the Spanish GP next weekend. 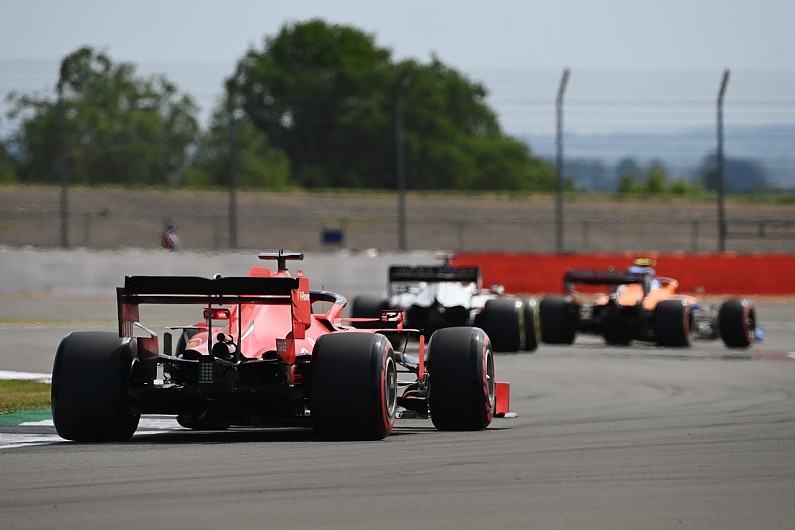 When is the F1 70th Anniversary Grand Prix?

How can I watch the 70th Anniversary GP?

In the United Kingdom, Sky Sports has exclusive live broadcasting rights (excluding the British GP), with the 70th Anniversary GP race shown live on Sky Sports F1. Pre-race coverage will be starting at 12:30pm BST ahead of the race start at 2:10pm BST.

Channel 4 will be showing extended highlights of the race on Sunday evening, starting at 6:30pm BST.

Autosport is running a live text commentary for the 70th Anniversary GP.

Current weather forecasts predict a cloudy sky with periods of sunshine at Silverstone on race day, with a minimal chance of rain throughout the day. The temperature is expected to be cooler than Friday but similar to Saturday with highs of 29 degrees Celsius for the start of the race.

How many laps is the 70th Anniversary GP?