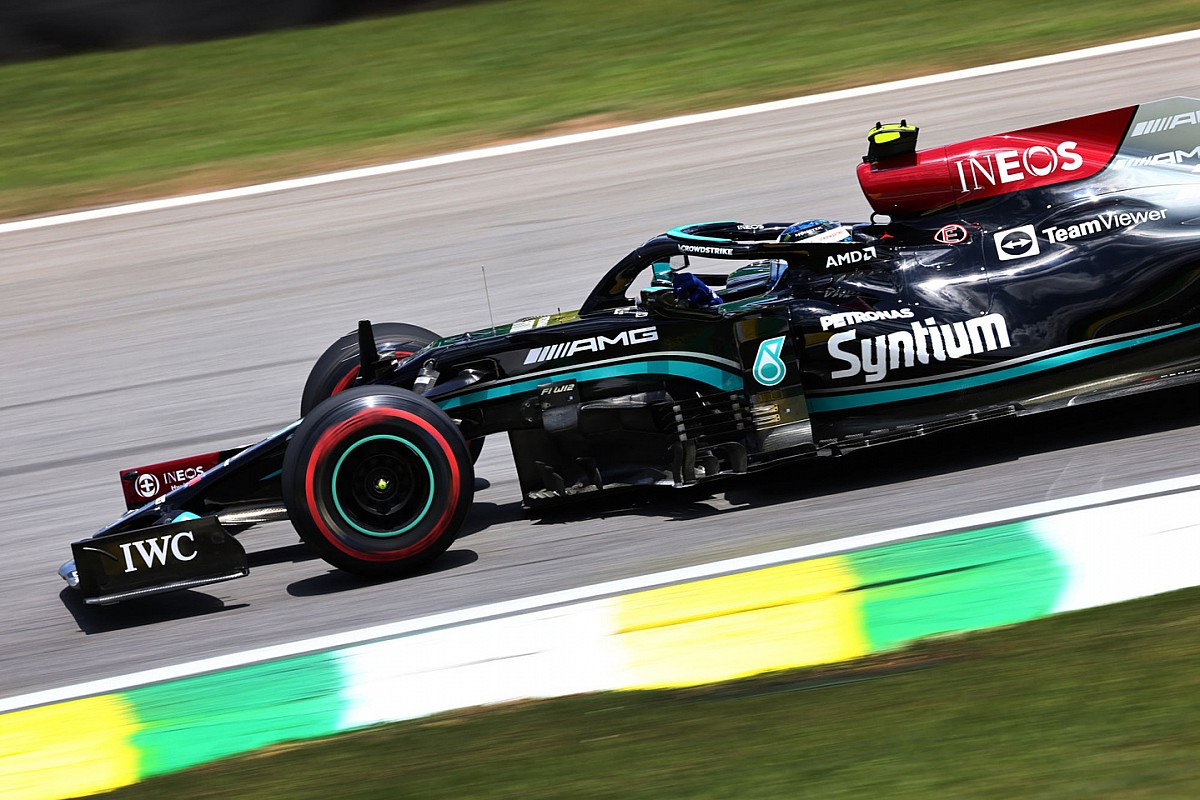 Bottas grabbed the lead away from the startline and was helped further as Red Bull’s Max Verstappen – who started on pole – was pushed back to third by Ferrari’s Carlos Sainz. The Dutchman recovered and quickly repassed Sainz to chase down Bottas.

But Verstappen couldn’t beat the Finn, and the win officially gives Bottas the Brazilian GP pole position accolade. His team-mate Lewis Hamilton drove from last to fifth in the 24-lap race.

With Hamilton banished to the back of the grid after his Mercedes breached the DRS rules in qualifying, new polesitter Verstappen led the pack off the startline. But he was beaten into Turn 1 by Bottas, who chose the soft tyre and launched ahead of him on the short run to the first corner.

Bottas led Verstappen, who was on medium tyres, the fast-starting Sainz, Sergio Perez and Charles Leclerc. Soft-shod Sainz passed Verstappen at Turn 4, the Red Bull driver running very wide and touching the grass as he rejoined.

Verstappen used DRS to repass Sainz for second into Turn 1 at the start of lap four and set off after leader Bottas. Verstappen got into Bottas’s DRS range with 10 laps to go but was unable to really get on terms and Bottas won by 1.1s.

As the Ferraris began to struggle with graining on the soft tyres, McLaren’s Lando Norris passed Leclerc for fifth on lap nine at Turn 4. Perez repeatedly attacked Sainz for third but couldn’t find a way past.

Hamilton was the star of the race and, on the medium tyres, rose to 15th on the opening lap after a strong start, and was helped when Kimi Raikkonen spun ahead of him after Kimi clipped his Alfa Romeo team-mate Antonio Giovinazzi. By one-third distance, Hamilton passed Fernando Alonso’s Alpine for 11th.

Hamilton entered the top 10 by overtaking the McLaren of Daniel Ricciardo on lap 13 and then passed Sebastian Vettel’s Aston Martin on lap 15 and Esteban Ocon’s Alpine a lap later.

He then moved past Pierre Gasly’s AlphaTauri with ease for seventh and passed Leclerc at Turn 4 with four laps to go. He caught Norris on the final tour, lunging ahead at Turn 1 to grab fifth place.

But Hamilton will start 10th on Sunday, due to an engine change grid penalty.