Victory at the 2016 Monaco Grand Prix slipped through Daniel Ricciardo’s grasp and left the normally jovial Australian enraged. But two years later at the 2018 edition, he banished those demons with a gutsy drive

The sight of Daniel Ricciardo without anything but a grin on his face is rare in Formula 1.

Even when thrust into the media pen after some of his toughest races with Renault last year, Ricciardo would always find some kind of silver lining, or at least poke fun at his own bad luck.

But some of the most iconic images of Ricciardo’s F1 career came from a moment where he was seething with anger, his face devoid of happiness as he accepted the second-place finisher’s trophy at the 2016 Monaco Grand Prix.

It was a race that had slipped through Ricciardo’s fingers. After scoring his maiden F1 pole the previous day, Ricciardo had dominated the opening stages of the race in rainy conditions before slipping behind Lewis Hamilton after pitting for intermediates.

Hamilton had been kept out on full wet tyres before making the switch to slicks, allowing Ricciardo to close right up before both came in to make the switch on consecutive laps. Hamilton completed his stop before Red Bull prepared to bring Ricciardo in one lap later.

But after a late change in deciding which tyre Ricciardo would be switched too, the Australian arrived in his pit box without any of his mechanics ready. They scurried back out with the tyres and fitted them to Ricciardo’s car, but as he snaked out of the pit exit after a nine-second delay Hamilton flashed past and took the lead. 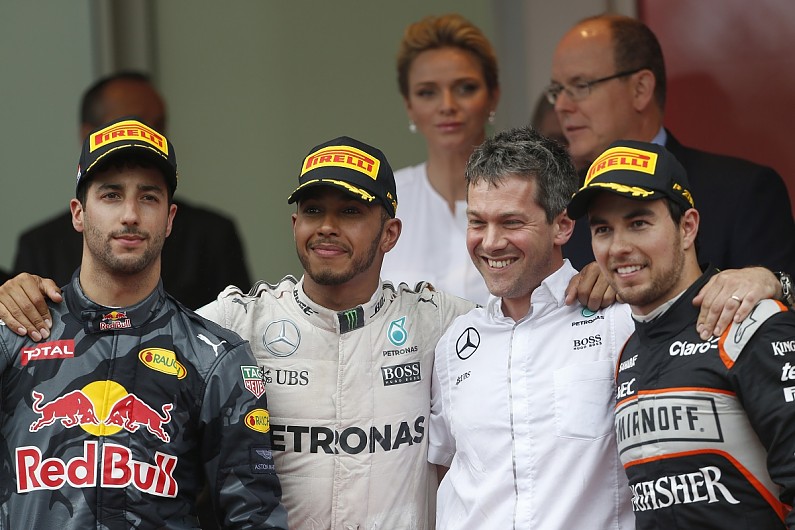 It left Ricciardo in a frustrated second for the remainder of the race, leaving big scars after coming so close to winning F1’s blue-riband event for the first time.

“I was so angry,” Ricciardo wrote in a recent Twitter post looking back on the race. “I wouldn’t have minded having a mechanical so I didn’t finish. I didn’t want to talk to anyone afterwards. I certainly didn’t want any sympathy – it was just pure rage.

“I didn’t want to hear anyone apologising and I didn’t think anything good could come from me pointing the finger either when I was so angry. It’s what made two years later so sweet.”

This time, all four tyres were ready far in advance and fitted with no issues. The hurdle that had knocked him down two years ago had been negotiated successfully

Ricciardo arrived in Monaco for the 2018 grand prix in a similar position to two years before. Red Bull’s car was, for once, the pacesetter that weekend, taking a 1-2 finish in both FP1 and FP2. Heading into Saturday, it appeared to be a straight fight between Ricciardo and young team-mate Max Verstappen for victory.

But in final practice, Verstappen blew his chances of a maiden Monaco win. A mistake exiting the Swimming Pool chicane caused him to slam into the barrier and ruin the front-end of his RB14 car, leaving his mechanics with an impossible repair job ahead of qualifying. Verstappen was forced to sit out qualifying as a result, paving the way for Ricciardo to take his second Monaco pole ahead of Sebastian Vettel.

With redemption on his mind, Ricciardo made a perfect getaway from pole to retain his advantage over Vettel, and quickly set about building his lead through the first stint. The gap remained stable at around two seconds before growing by a further second as Vettel’s tyres began to fade.

Vettel tried to get the undercut on Ricciardo by pitting at the end of lap 16, forcing Red Bull to respond one lap later. This time, all four tyres were ready far in advance and fitted with no issues, allowing Ricciardo to emerge from the pits still leading. The hurdle that had knocked him down two years ago had been negotiated successfully. 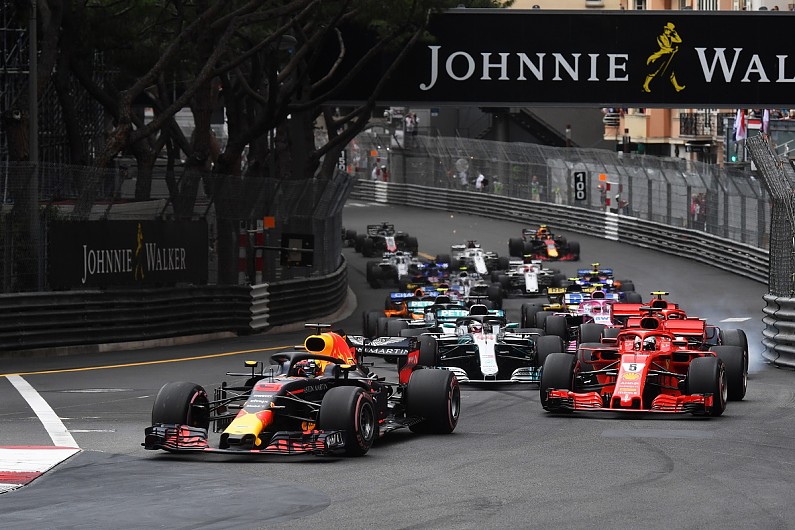 But Vettel began to take some bites out of Ricciardo’s advantage before the gap dropped by almost a second in one lap alone. Ricciardo reported on lap 28 that he was losing power, asking engineer Simon Rennie if there was anything he could do.

“We can see what’s going on, you just need to keep it smooth, keep it focused,” replied a soothing Rennie. Ricciardo was less relaxed, simply stating: “I’ve got no power though!”

Vettel managed to close up to Ricciardo and get within DRS range as the Red Bull ran as much as 12mph down on its usual top speed at the end of the straights. It turned out to be an MGU-K failure that was costing him around 160bhp, and meant he could not use seventh or eighth gear.

It was an unenviable task with 50 laps remaining to nurse both his car and his tyres as he ran around 2.5 seconds per lap slower than his fastest time in the race. Red Bull had no plans to save the engine by retiring the car, with team principal Christian Horner later saying his position was “we’re leading the Monaco Grand Prix – we’ll run until this engine stops”.

But as the race wore on, Vettel struggled to get close enough to truly hassle Ricciardo or line up a move. The Ferrari driver opted on multiple occasions to back off and give Ricciardo some space, cooling his tyres for a renewed charge, but the split between the pair never read less than nine-tenths of a second as the laps ticked by.

Vettel was forced to give up on catching Ricciardo after Stoffel Vandoorne pitted under the virtual safety car with six laps to go, emerging from the pits between the two drivers heading the field. Rennie tried to give some final words of encouragement, only for Ricciardo to interrupt: “I got it buddy!”

And after 78 laps, there was relief at last for Ricciardo. He eventually crossed the line seven seconds clear of Vettel, clinching Red Bull’s first Monaco win since 2012 and becoming the third Australian to win the race after Mark Webber and Jack Brabham. 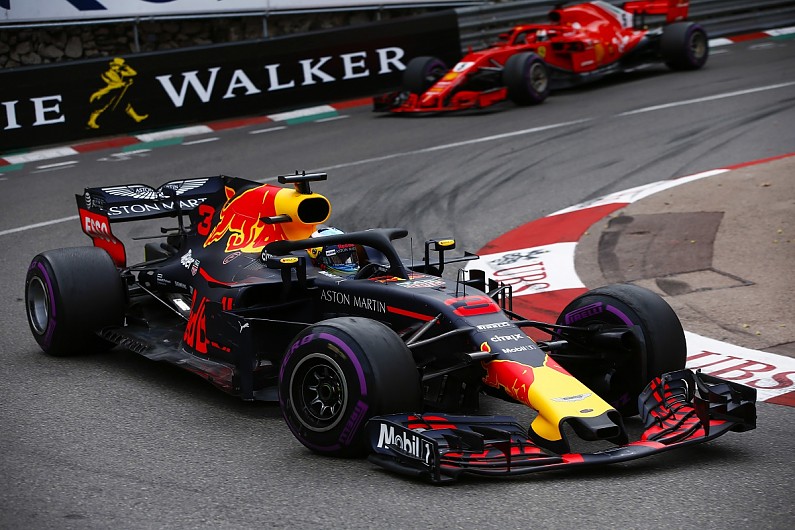 “Absolutely amazing!” cried Rennie over the radio. “I don’t know how you did that Daniel, incredible. Holy s**t!”

Horner was quick to jump on the radio and hail Ricciardo’s herculean effort in the car, calling it “un-f**king-believable”.

It was a day of redemption for Ricciardo, ensuring he would not go down in history as a driver who nearly won in Monaco

“You have done an amazing job today – that is right up there with what Schumacher did,” Horner said, referring to Michael Schumacher’s run to P2 at the 1994 Spanish Grand Prix when stuck in fifth gear. “That is payback for 2016. Give Prince Albert a shoey!”

Unfortunately Ricciardo didn’t make his trademark celebration a group activity, instead preferring to serve Prince Albert and his wife, Charlene, their champagne from the winner’s bottle.

It was a race that really marked the high point for Ricciardo at Red Bull. After the race, there was talk of his stock being higher than ever, helping his contract talks with the team amid speculation of outside interest. To this day, it remains his most recent visit to an F1 podium.

But it is certainly one of the most significant wins of Ricciardo’s career, something he made note of when looking back on his most emotional races. 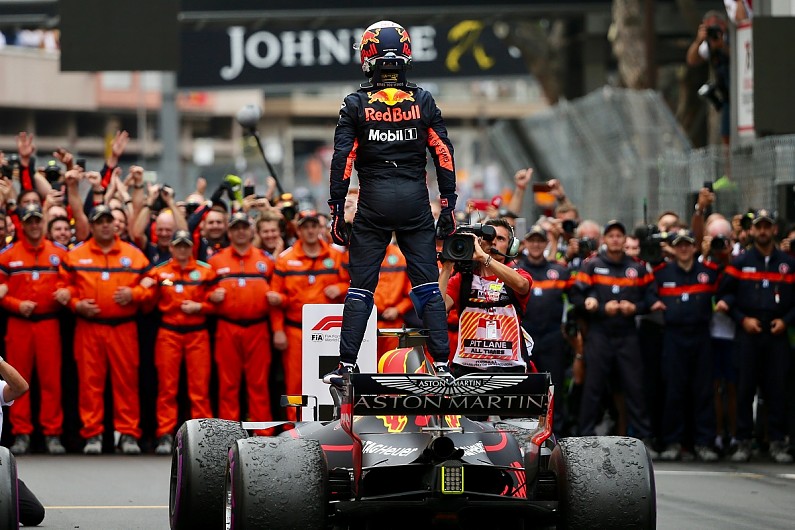 “I’m not going to lie, Monaco 2016 haunted me for two years, and then to not put a foot wrong in 2018 and thinking the win would slip away from me again…” Ricciardo remembered.

“[But] 2018 was a different level of stress, simply because of what had happened there in ’16. The main feeling was sheer relief that this time I didn’t have it taken from me.

“I enjoyed it more the days after the Sunday when it all sunk in, but that Sunday night – I was just burned out. It was more a massive exhale than anything else.”

It was a day of redemption for Ricciardo, ensuring he would not go down in history as a driver who nearly won in Monaco.

Even if his prospects of adding to his haul of seven grand prix wins in the near future look slim, a Monaco Grand Prix victory – and such an emotionally-charged one – is something that can never be taken from him. 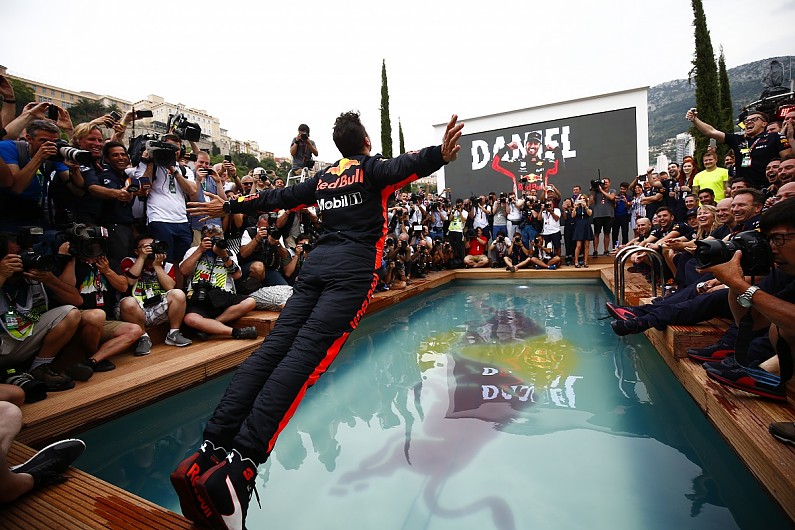