Hamilton’s 1m34.842s would have edged him ahead of Perez by 0.104s, but going beyond the accepted track limits at the penultimate corner on a qualifying simulation run mid-way through the second 60-minute session cost the world champion the top spot and left the Red Bull heading the times with a 1m34.946s.

In sweltering conditions at the Circuit of the Americas, the pack initially emerged on the harder compounds – with Antonio Giovinazzi establishing the first place benchmark at 1m38.355s on the medium tyres.

Esteban Ocon, Kimi Raikkonen and Lance Stroll all enjoyed brief stints in first place during the initial running, before FP1 pacesetter Valtteri Bottas used the yellow-walled rubber to bring the fastest time down to a 1m38.887s.

A few minutes later he was deposed by Perez’s 1m35.883 and the pair continued to trade best times over the next section of the session, with Perez’s 1m35.716s set approaching the 15-minute mark then holding the top spot until the drivers began to switch to the softs.

Stroll led the way, moving into first place on a 1m35.561s for Aston Martin just past the 20-minute mark. 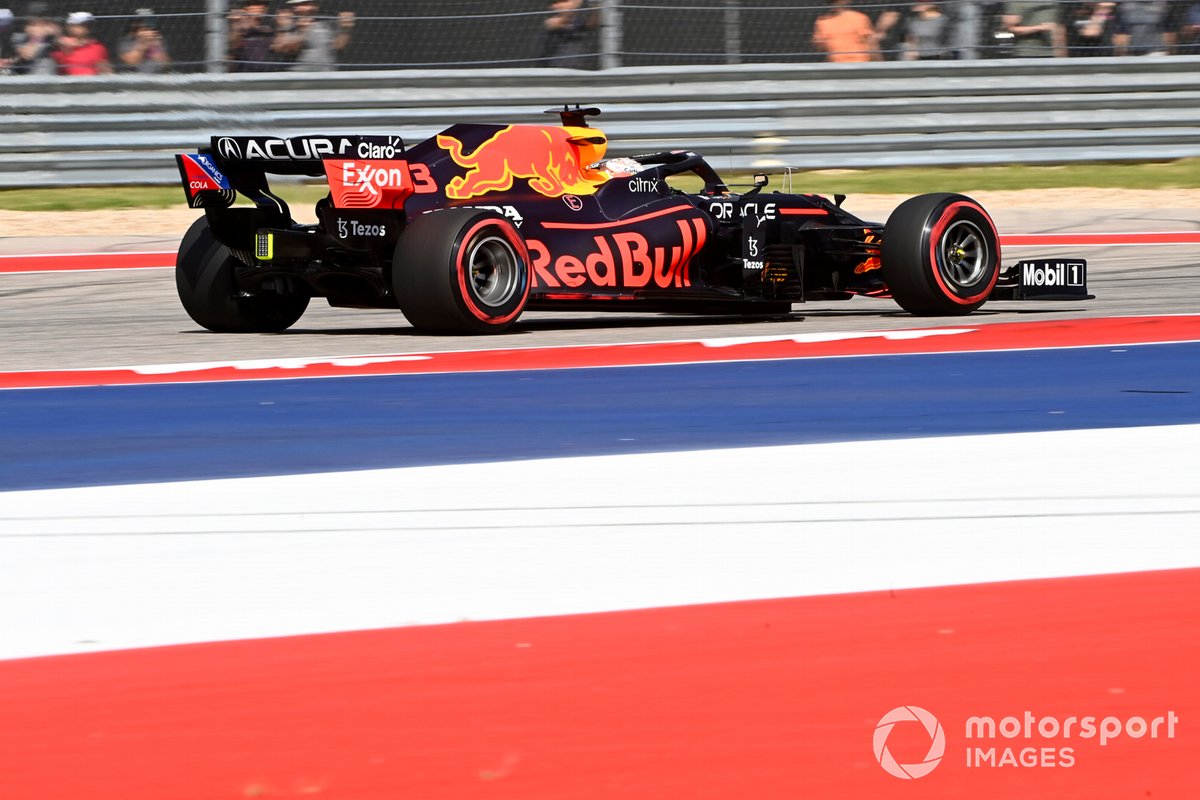 Bottas then went back to the top spot on a 1m35.360s, but this was considerably slower than Hamilton’s best – set a few minutes later.

But after Hamilton had been stripped of his first lap on the softs, he stayed on it and eventually posted a best effort of 1m35.310s – the red-walled rubber a long way past its best after completing a second, slow cooldown lap in the hot conditions.

Before Hamilton post a legal lap on the softs, Perez had retaken the top spot just before the 30-minute with his 1m34.946s, with Norris then slotting into second on his flying effort on the softs to wind up 0.257s adrift.

Norris had had to return to the pits for a spell in the early stages after he reported “something loose around my elbow” that meant he could not “turn properly”.

Red Bull never got to see how Verstappen would slot into the battle at the top of the times, as the Dutchman abandoned his soft-tyre run – frustrated with his team’s traffic management.

Verstappen was preparing to begin a flying lap on the softs when several cars moved ahead of him and he was forced to complete another preparation lap – after which he set the session’s best time in the first sector before backing off and pitting after running into the traffic that had jumped ahead of him and those cars then on cooldown laps back to the pits. 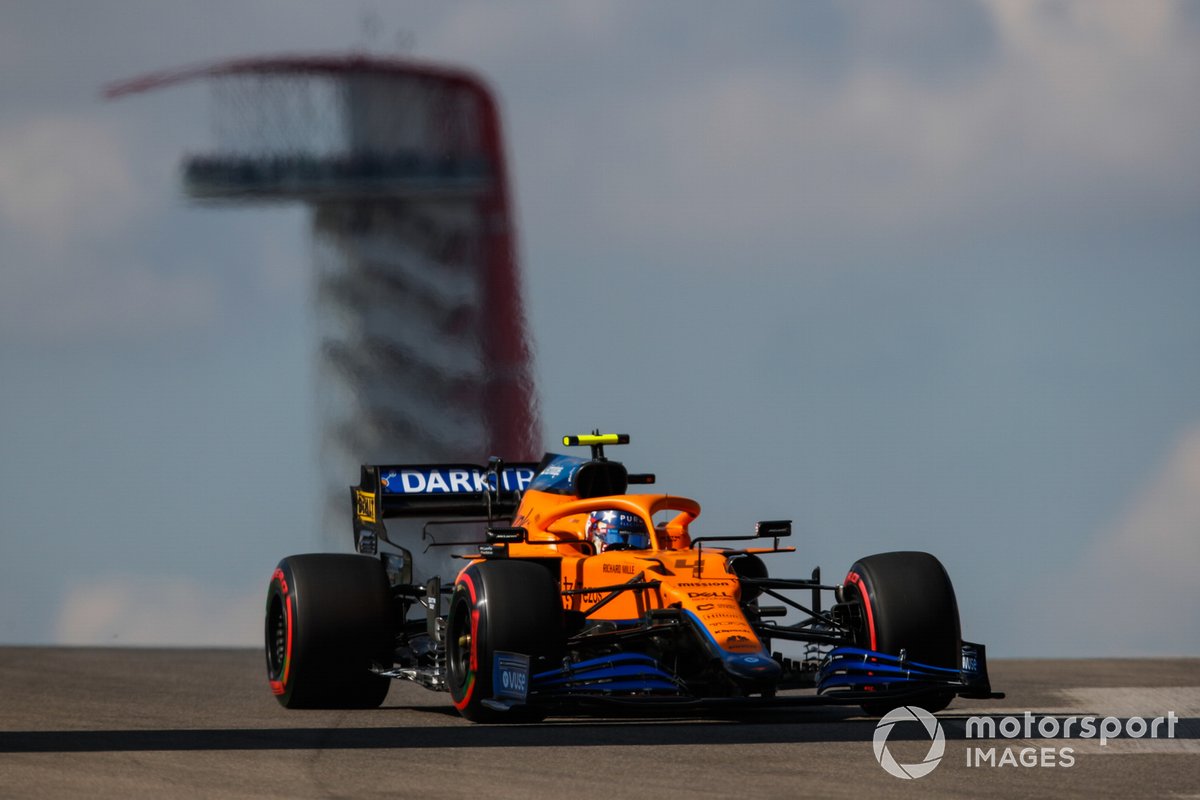 The current championship leader angrily told Red Bull he was “boxing – fuck this” to concentrate on his upcoming long running as he was “over this short run”.

Earlier in the session, Verstappen and Hamilton had raced through the final corner and down the pit straight, then continuing side-be-side into the tightening uphill left of Turn 1 – a situation where Verstappen was told by Red Bull to “ignore” Hamilton’s move to get ahead.

The order stayed stable during the long running that concluded FP2, where the teams gathered useful data on tyre longevity to understand whether they can get through the race on a one or two stopper in the Texas heat.

Bottas took fourth ahead of Daniel Ricciardo, with Stroll shuffled down to sixth ahead of Charles Leclerc and Verstappen – who’s best lap remained his fastest from the medium tyre running in the early stages.

Carlos Sainz Jr and Giovinazzi rounded out the top 10.

The end of the session featured Fernando Alonso spinning off at the penultimate corner with just over three minutes to go – the Alpine driver, 13th in the final FP2 standings, shooting off backwards at the fast left-hander after touching the kerbs on the outside. 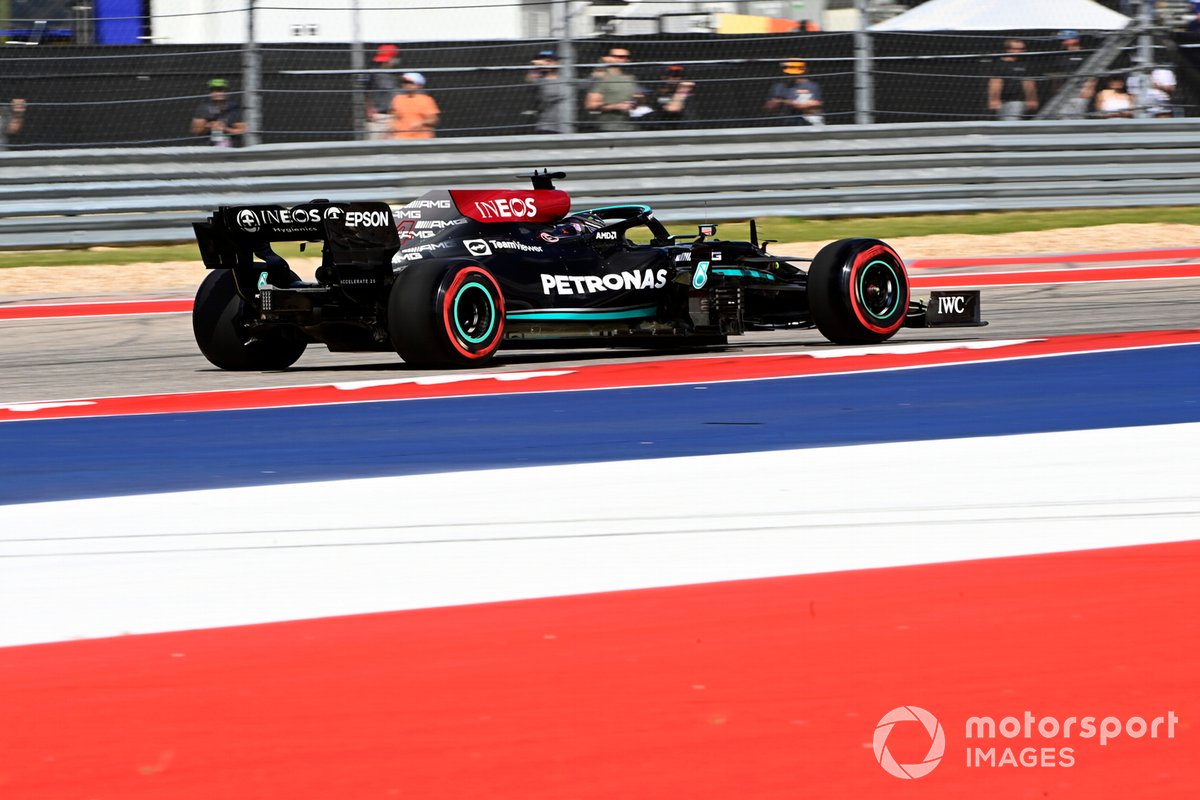 With a tailwind pushing the cars into that corner, Alonso was quickly turned around and he skidded rearwards through the asphalt runoff and then gravel, tapping the barriers as he ground to a smoking halt and picking up minor endplate damage on his rear wing.

Giovinazzi also stopped inside the final corner as the cars returned to the pits at the close of the session before he turned sharply left and toured back towards the Alfa Romeo garage at slow speed.