Mercedes fell to a late defeat to Red Bull at Paul Ricard as Verstappen passed Lewis Hamilton for the lead on the penultimate lap, making an aggressive two-stop strategy work.

After Verstappen pitted for a second time on lap 32 and switched to the two-stop, Mercedes committed to a one-stop strategy with both Hamilton and Valtteri Bottas.

Hamilton and Bottas were heard on the radio at points talking about a possible second stop, but the threat of Perez in the second Red Bull made Mercedes think twice about it.

“The fight between the three cars was intense at the front, and I think you then basically had to opt to continue with the one-stop or for the two,” Mercedes team principal Wolff said after the race.

“The two-stop was a danger for us, because Perez was in the way. We got it wrong today.

“If Perez wouldn’t have been in the window, we would at least with one car have opted for a second stop, and early, then basically put the other Red Bull car in a difficult situation.”

Perez struggled in fourth through the early part of the race due to the windy conditions, but was able to stabilise the gap to Bottas ahead and only allow it to increase by just 0.2 seconds between lap 6 and lap 16.

Perez was then able to extend his stint on the mediums, staying out seven laps longer than Bottas. He emerged from the pits 19 seconds off Verstappen in the lead, but thanks to his fresher hard tyres, he caught the Mercedes drivers at a rate of half a second per lap.

It set Perez up for a late pass on Bottas for third, clinching the Mexican back-to-back podiums for the first time in his F1 career. At the chequered flag, he was just 8.8 seconds off Verstappen, and less than six behind Hamilton in P2. 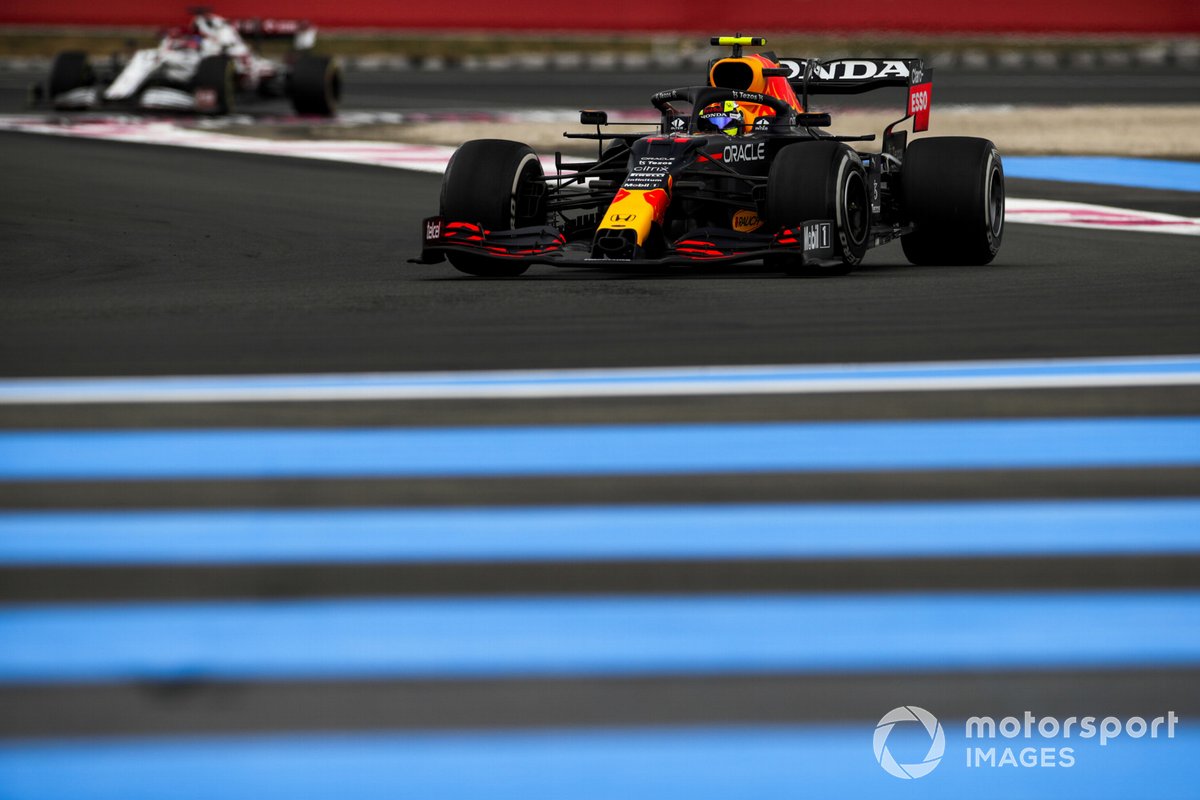 “It took a few laps for that to calm down for him, and I think once he did that, he was able to run at the leaders pace and actually start to close in on Bottas,” explained Red Bull team principal Christian Horner.

“So he just played out to being a better strategy for him. Another couple of laps, or if he had managed to clear Valtteri a lap or two earlier, I think he would have been right on Lewis on the last lap.”

Wolff said that Mercedes knew Perez was “always in the window” to complicate a possible two-stop strategy, meaning Hamilton or Bottas would have to clear him on-track – unlike Verstappen, who was waved past his teammate early into his third stint.

“He wasn’t far off,” Wolff said of Perez. “He was obviously not in contention for the podium in the beginning, but they were able to go long, and that proved to be the right strategy to make it back to the podium.”

Perez managed to pass Bottas with four laps left in the race, opening the door for Mercedes to bring the Finn in for a set of softs and go for the fastest lap to grab the extra bonus point.

But Mercedes did not make a second stop, instructing Bottas to try and stay within five seconds of Perez, who the team believed could receive a penalty for making the pass for third off-track. The stewards ultimately ruled that Perez had not gained an advantage in the move for third, while Bottas finished 5.8 seconds behind.

“We thought maybe Perez gets a penalty for overtaking outside of the track limits, so we said stay within five seconds,” Wolff said. “It was really balancing between that penalty or making fastest lap. We gambled, we lost.”