McLaren says Carlos Sainz Jr will not be frozen out of any technical discussions at the team this year despite his switch to Ferrari for 2021.

Earlier this year Sainz agreed a move to Ferrari for next season as replacement for Sebastian Vettel, who is on his way to Aston Martin.

While drivers moving to new teams has often left them locked out of any technical or development discussions, in case they take valuable knowledge with them to their new bosses, McLaren thinks its fortunes are best served proceeding as though nothing has changed.

McLaren team principal Andreas Seidl said that his outfit’s main focus now is scoring the points it needs to finish third in the constructors’ championship – which is why it needs all the help it can from Sainz.

“At the moment, Carlos is still fully involved in everything we are doing here at the track and also back home,” said Seidl at the Tuscan Grand Prix.

“We clearly have the philosophy that that’s the right way forward in order to get the maximum out of Carlos also.

“In the end, we share the same goals this year. He wants to get maximum points and results, and the same is happening on our side. That is valid for us as a team. And to be honest, I think we will go ahead like this until the end of the season.” 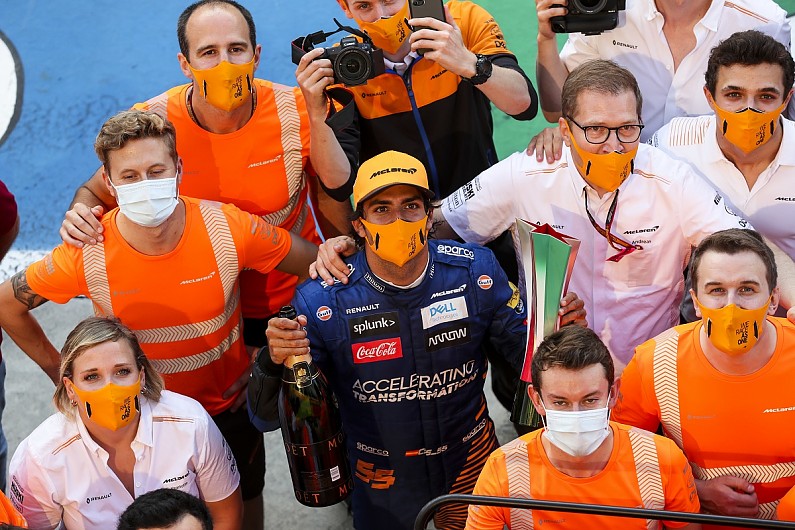 Earlier this year, Renault team principal Cyril Abiteboul said that his team was not worried that Sainz’s replacement Daniel Ricciardo would take any valuable knowledge with him because McLaren’s scope for improving its car was limited by its engine switch to Mercedes.

He said: “With the way that the structure is, that the cars are more or less frozen between this year and next year, and also McLaren will have to use all their tokens on the pure chassis/engine integration, so no performance development there, that will give us the opportunity to work extremely normally with Daniel.

“The only thing is he won’t be exposed to 2022. But frankly he would not be anyway, because it’s still a bit far away from a driver perspective, even though a substantial part of our workforce is already on to 2022.”