Daniel Ricciardo says that the Renault Formula 1 team has lost out on the “slippery” surface at Portimao due a lack of downforce compared to its main rivals.

The Australian narrowly made it through Q2 in tenth place, one spot ahead of team-mate Esteban Ocon, but a spin at the Turn 10 right-hander resulted in his RS20 clipping the barrier with its rear wing.

The Renault mechanics attempted to complete repairs so that he could run in Q3, but just failed to get him out in time, with Ricciardo estimating that “one more minute” would have been enough.

He thus had to settle for 10th on the grid having not set a time in the final session.

Ricciardo, who ended a podium drought dating back to the 2018 Monaco GP at the Nurburgring last time out, explained that Renault had struggled for grip on the newly resurfaced track all weekend, with its “main limitation” of downforce exacerbating its struggles.

“It’s been a pretty tricky weekend, it’s been probably tricky for everyone,” he said.

“It’s very slippery, this new surface, I don’t think it’s had that much curing time. So I guess that the oil and whatever is still coming up from it.

“I think for that, everyone’s probably just put max downforce on. And we know we’ve improved there, but it’s still I’d say, our main limitation is max load and downforce.

“And I don’t think we’re able to generate the grip on this low surface that maybe our competitors are, so I think that’s where we’ve missed the tenth or two if I was to make an assumption.

“Obviously getting into Q3 was our target. We did, but obviously then had some damage with the spin.” 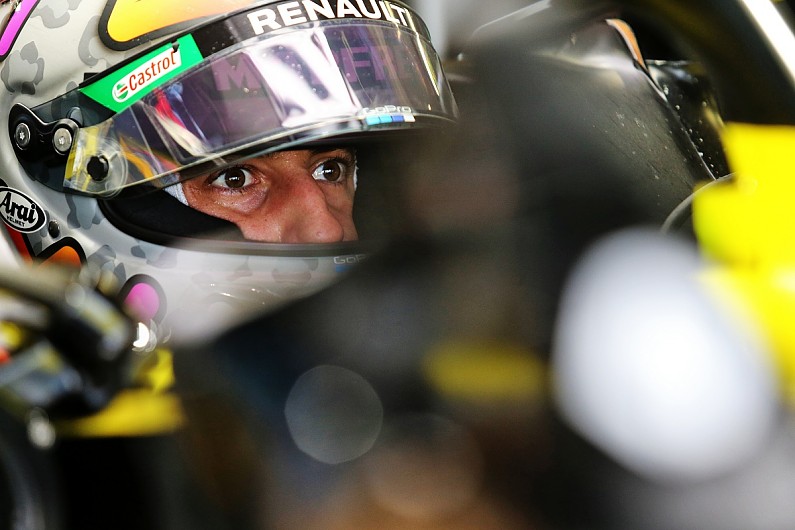 Ricciardo suggested that wind also contributed to his incident as he was passing slower cars off-line, including Ocon.

“Turning in and braking, it depends where the wind is coming from,” Ricciardo said.

“It felt like as soon as I got in I lost the rear.

“It just kept going and going until I hit the barrier and damaged the rear wing.

“The team actually got very close to getting me back out on track for Q3. I think one more minute and we were on track.”

Ricciardo conceded that it won’t be easy to make progress in the race, with limited passing opportunities afforded at the Algarve Circuit.

“I’m hoping it’ll be like Mugello where we didn’t expect it to be good and it was,” he said.

“Hopefully it can, but obviously Turn 1 being so fast, you really have to be alongside the car to make it happen.

“Otherwise, it is tricky to overtake.

“Maybe the conditions with a cold track, it might produce some graining, and then you might get some differences in cars and speed, and hopefully that creates opportunity.

“Into Turn 5, it is a hairpin – it is pretty narrow at the apex, but I think if you get a run into Turn 5, it could be an option.”