Verstappen not expecting "straightforward and easy" Italian GP against Mercedes Verstappen will start Sunday’s race from pole position because of sprint race winner Valtteri Bottas dropping to the rear of the field thanks to Mercedes giving him a fourth 2021 engine ahead of Friday evening qualifying, which the Finn also topped.

Lewis Hamilton, who finished the sprint race in fifth after making a poor start, reckons Verstappen’s position at the head of the pack for the grand prix allied with the two McLarens starting in between this season’s two title rivals means “it should be an easy win for him”.

Hamilton was unable to repass McLaren’s Lando Norris despite pressuring his fellow Briton for most of the sprint race.

But Verstappen insisted Red Bull will not have an easy ride at Monza on Sunday because of the strength Mercedes has shown so far across the event.

“It was a good day for us [on Saturday],” Verstappen said in the post-sprint race press conference.

“[I got a] good start and from there onwards I tried to of course follow Valtteri around, even though in general I think we lacked a little bit of pace to really mount a challenge.

“But I just tried to stay in the tow a bit and yeah from our side it was good. Again, two points scored and of course starting first tomorrow.

“I still don’t expect it to be a very straightforward and easy race.

“Because Valtteri [is] coming from the back but of course Lewis is starting in P4. They have a lot of pace. We’ll see what we can do again.” 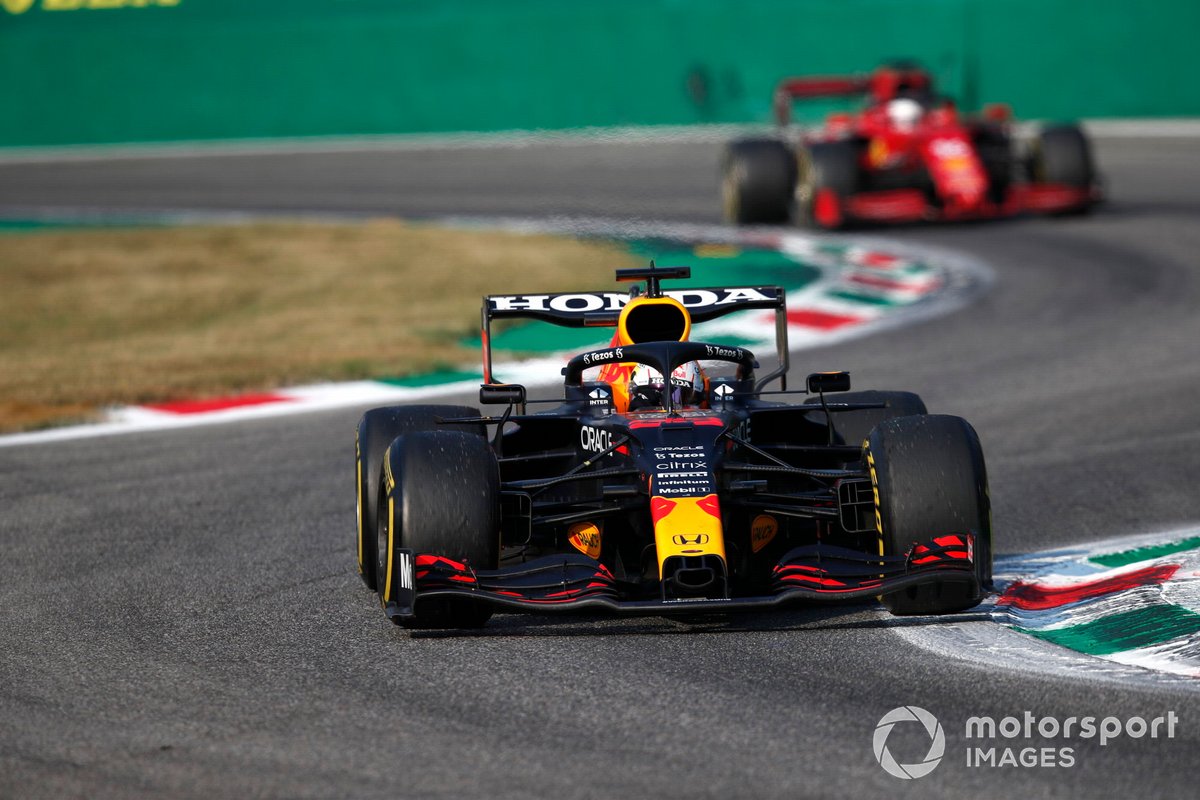 When asked how important it was to take pole at Monza, where the sprint race did not feature much overtaking, Verstappen replied: “If you get cleanly through Turn 1 and 2 of course it’s very good.

“It’s quite a decent run to Turn 1, but overall if you just have a good start it should be enough to defend. Let’s see tomorrow.”

Verstappen also said there was “not really” any additional unknowns for F1 teams caused by the sprint event timetable taking away one third of the practice time scheduled for every event in 2021.

“We had FP2 where we did long runs,” he explained about how prepared the teams are for Sunday’s race.

“And of course we did the race now. I think it’s pretty straightforward. We know what we have to do, we know where we are lacking.

“But of course you cannot change that [because set-ups are locked in from Friday evening qualifying by the parc ferme rules] so we’ll just try to do the best we can in tomorrow’s race.”