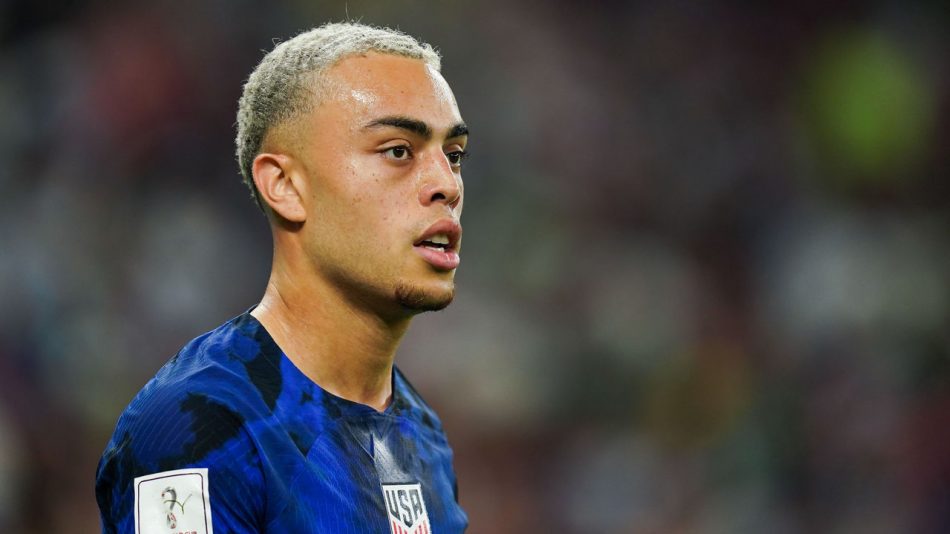 The 2022 World Cup is in full swing. At the end of every matchday, we’ll review the biggest talking points emanating from Qatar and break down all the action on the pitch. Below, we look back on Day 10 of the tournament.

Sergino Dest, with help from Weston McKennie and Timothy Weah, caused England problems in the United States’ second group game. There were similar collaborations down the right Tuesday against Iran. However, with McKennie thriving in a more central role in a vital 1-0 win for the U.S., Dest linked up well with Yunus Musah and was a popular target for cross-field switches.

Three of left-sided center-back Tim Ream’s four long balls from the middle third were sprayed to the right flank, where Dest’s positioning and positivity on the ball stretched Iran. The on-loan AC Milan right-back made slick touches in tight areas, and his off-the-ball movement tired Milad Mohammadi in the first half. Before the break, Dest had the joint-most touches with Tyler Adams (53), two completed take-ons, and three dangerous deliveries into the box.

One of those deliveries resulted in Christian Pulisic’s match-winning goal. Dest saw McKennie receive the ball in space in front of Iran’s deep defensive and midfield lines, and he took advantage of a rare Iranian lapse. Mohammadi and Ehsan Hajsafi were out of position – forward Sardar Azmoun was the closest opponent to Dest – so the full-back ran into the gap and under McKennie’s chip before nodding the ball across for Pulisic’s close-range finish.

Obviously, the U.S. will have bigger challenges the deeper it goes, and the Netherlands awaits Gregg Berhalter’s side in the round of 16. But, while the threat from Cody Gakpo and Memphis Depay is considerable, Dest may have some helpful insight on plenty of Dutch players given his schooling in Ajax’s academy.

Pulisic doesn’t shy away from spotlight

Pulisic admitted in February that he puts “too much pressure” on himself to “save” the United States while on international duty. The “Captain America” tag certainly hasn’t helped.

There have been some below-par performances from Pulisic over his 55 U.S. caps, but there’s evidence to suggest he thrives in high-pressure games.

He scored a huge goal against Mexico and pocketed a hat-trick versus Panama during the qualification cycle for Qatar 2022. He knocked two past Jamaica to send the U.S. into the 2019 Gold Cup final and scored a high-pressure penalty to down Mexico in extra time of the 2021 Nations League final.

Pulisic added further proof to the argument that he flourishes on big occasions with his scruffy tally against Iran.

After more than a decade of planning the most expensive World Cup in history, all Qatar’s national team has to show for its on-pitch efforts is three dismal defeats. That’s hardly the return on investment organizers envisioned after spending approximately $220 billion to host football’s showpiece event – smashing the previous record of $15 billion set by Brazil in 2014.

As Qatar attempted to prove it belonged on the sport’s biggest stage, it became glaringly obvious that the 2022 World Cup host was way out of its depth. Over 10 days, the Middle Eastern nation tasted nothing but defeat.

Tuesday’s loss to Group A winner, the Netherlands, was the final nail in Qatar’s World Cup coffin. The loss ensured that FIFA’s 50th-ranked nation, which had already been eliminated, ended the tournament on a historic low note. After becoming the first host nation to lose the opening match, Qatar then became the first host to lose its opening two games. Now, with zero points from three contests, Qatar will forever be remembered as the worst-performing World Cup host of all time.

Aside from Mohammed Muntari recording Qatar’s first World Cup goal, there was hardly a reason for home fans to cheer. Perhaps the nerves got the better of a Qatari side that never mounted a credible challenge to suggest it could compete with its Group A opponents.

Qatar coach Felix Sanchez conceded that his squad was “still slightly behind” the competition at the 2022 World Cup. That’s a generous verdict for a Qatar side that, even with the expansion from 32 to 48 teams, likely won’t be at the 2026 World Cup.

Aliou Cisse carried the disappointment of slamming his decisive penalty against Alioum Boukar’s legs during the shootout in the 2002 Africa Cup of Nations final. His miss meant Cameroon won the tournament while Senegal’s wait to be crowned king of the continent continued.

Even captaining his country to the World Cup knockout rounds a few months later didn’t diminish his desire to make amends. He mentioned it while coaching Senegal to the AFCON final in 2019. His side lost 1-0 to Algeria in that showpiece.

But, at long last, Cisse should now be confident that he’s more than atoned for that penalty in Mali. First, he overcame huge pressure to lead Senegal to its first AFCON success earlier in 2022 – over 56 years after the country’s inaugural appearance in the tournament.

“We would like to win this for him and our country because he deserves it after everything he went through as a player for Senegal and now as the coach,” Sadio Mane said about his national team boss days before he converted the winning penalty in the final.

Then, Cisse took Senegal into its second-ever World Cup knockout appearance courtesy of Tuesday’s 2-1 win over Ecuador. Instead of relying on Mane – who was confirmed out with a leg injury just four days before his country’s campaign began – Cisse created a stronger team dynamic. Five different players have scored Senegal’s goals in Qatar, and the midfield was near-impenetrable against Ecuador.

However, the main concern going into the round of 16 is with Cisse’s midfield. Will Senegal’s core be as impressive now that Idrissa Gueye is unavailable due to suspension?

With the entire nation clamoring for Phil Foden to start and England to play a more expansive style after its turgid performance against the United States, Gareth Southgate gave the people what they wanted versus Wales. He did the same with Marcus Rashford. The latter promptly scored twice, including a gorgeous free-kick, while Foden netted the other tally in a comfortable 3-0 triumph that secured top spot in Group B. It was just the Three Lions’ second victory in their last nine matches overall. Now the England manager, who’s constantly under the microscope, has a selection headache going into the last-16 clash with Senegal. Heavily criticized for being too wedded to certain players, including Raheem Sterling and Mason Mount, the 52-year-old tactician has a big decision to make. Foden and Rashford injected some life back into the England attack and deserve to start in the next round. Meanwhile, Sterling and Mount have consistently performed during Southgate’s tenure. Bukayo Saka didn’t start Tuesday, either, but has been a bright spot in the tournament. Someone will inevitably be disappointed when left out of the lineup against the African champion. In a way, it’s a good problem to have, but it’s a delicate situation Southgate needs to manage properly.

Paying tribute to ‘The Wardrobe’

Papa Bouba Diop, nicknamed “The Wardrobe” in England due to his imposing stature, was remembered by fans and players during Senegal’s final group match. The Lions of Teranga icon died exactly two years prior to Tuesday’s meeting with Ecuador. On the international scene, the defensive midfielder was best known for his match-winning goal against defending champion France at the 2002 World Cup. In addition to representing Senegal 63 times, Diop starred for numerous clubs, including Fulham, Portsmouth, and Lens.

Marten de Roon isn’t the most fashionable player in the Netherlands’ squad. Far from it. But he might be one of the most important. The 31-year-old midfielder started his first match of the tournament Tuesday, and the Dutch, so stodgy and underwhelming against Ecuador, looked like a more cohesive unit in a 2-0 victory over Qatar. This comes with the caveat that Qatar is objectively the worst team at the World Cup. However, De Roon’s presence at the base of Louis van Gaal’s midfield helped liberate Frenkie de Jong, who slid to the left and pushed higher up the field in a No. 8 role, connecting with Daley Blind and Memphis Depay to create slick passing triangles. Reverting to a system that asks De Jong to play deeper in the last-16 meeting with the United States would be a mistake.

FIFA opened disciplinary proceedings against Croatia on Tuesday after some of its fans displayed a banner designed to taunt Canada’s Yugoslavian-born goalkeeper Milan Borjan. The 35-year-old’s hometown of Knin is now within Croatian borders, but it was an ethnic Serb region until conflict in 1995 forced the Borjans and other families to flee. The message unfurled at Khalifa International Stadium on Sunday referred to this victory for Croatian forces.

Defeat to England may have marked the unofficial end to the golden age of Welsh football. After Wales did brilliantly to end its 64-year wait to reach the World Cup, it became clear after three games without a win in Qatar that big changes could be on the horizon for the aging Dragons. The future of Gareth Bale’s international career is bound to dominate headlines in Wales. At 35, it’s unlikely that Bale will ever feature in a major tournament for Wales again. If that’s the case, it was a sad way to go out, as he touched the ball just seven times before being taken off at halftime against England with an apparent injury. While other members of the team, such as Aaron Ramsey, may also consider their futures, none will be missed as much as Bale. If he does hang up his international boots, Cymru will be forced to rebuild for a future without a player who, despite his recent dip in form, is the true definition of a generational talent.

Stat of the day

Senegal will have some additional support in its corner against England.