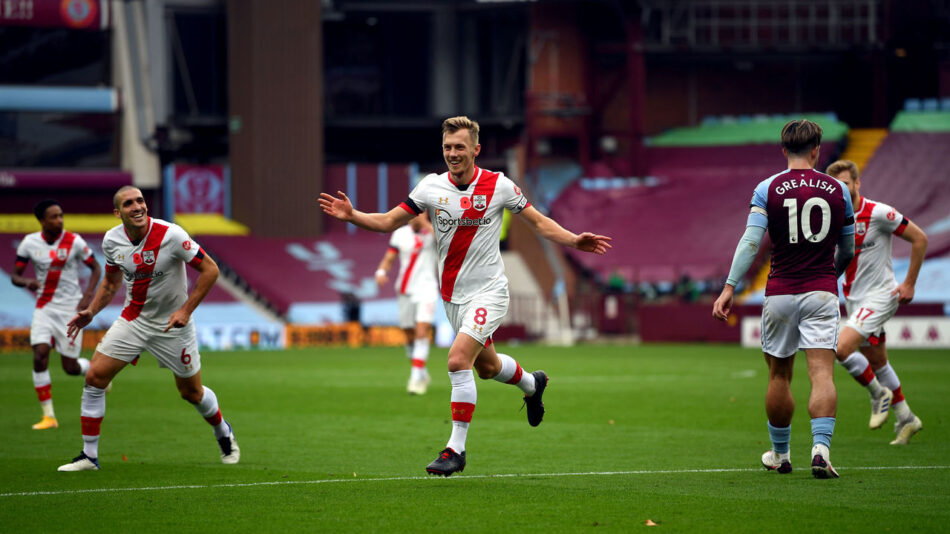 theScore examines the most important Premier League developments by answering the key questions from this weekend’s slate of action.

Is Ward-Prowse the best free-kick taker around?

James Ward-Prowse has scored the most free-kicks for Southampton in the Premier League after bagging his seventh and eighth in Sunday’s 4-3 win over Aston Villa. And he began his fine outing by assisting Jannik Vestergaard from, you guessed it, another dead-ball scenario.

It was the perfect way for Ward-Prowse to celebrate his 26th birthday.

Lionel Messi is obviously the most serious contender for the free-kick crown but the competition is pretty slim after that. In the Premier League, Everton have three strong set-piece deliverers – James Rodriguez, Lucas Digne, and Gylfi Sigurdsson – but they aren’t as consistent as Ward-Prowse and Messi. Cristiano Ronaldo hadn’t scored a free-kick for Juventus before he finally converted his 43rd attempt in July.

There is an outsider pick: ex-Celtic man Shunsuke Nakamura is still a menace from free-kicks for hometown club Yokohama FC at the age of 42.

West Ham on the right track?

Rather than continuing to gamble on expensive players from the continent, West Ham have changed their approach by recruiting from under-farmed areas of Europe (Tomas Soucek and Vladimir Coufal both arrived from Czech side Slavia Prague) and the EFL (Jarrod Bowen and Said Benrahma were picked up from Hull City and Brentford, respectively).

The result is a hardworking unit after the likes of Felipe Anderson and Manuel Lanzini were nudged aside, while a move to a back-three has tightened up the defense. Saturday’s 2-1 loss at Liverpool was a small, and expected, setback, but West Ham should expect to rise up the standings following their upcoming meetings with Fulham, Sheffield United, and Aston Villa.

What is Wolves’ target for this season?

It feels like a period of transition for Nuno Espirito Santo’s outfit.

Wolverhampton Wanderers completed two of the three most expensive incoming deals in the club’s history over the summer, but it was largely a window used to bring in youngsters who will be given time to adapt to the English game. Even their most high-profile sale – Diogo Jota to Liverpool – made sense for the squad as it opened up more opportunities for Daniel Podence – who is only in his mid-20s – 20-year-old Pedro Neto, and 18-year-old Fabio Silva.

We’re already seeing evidence of how good this Wolves side could be.

The attack expertly unsettled Crystal Palace’s defense in Friday’s 2-0 win. Neto keeps on improving and gave both Patrick van Aanholt and Scott Dann a torrid time at Molineux; Raul Jimenez performed admirably in his battle with Cheikhou Kouyate; Podence and Rayan Ait-Nouri ran rings around Nathaniel Clyne in the first half.

Wolves will take a while to find some consistency, but entertainment may soon be guaranteed.

Is this the end for Burnley?

Saturday’s defeat to Chelsea at Turf Moor took place under the cloak of £200-million takeover talks. Burnley boss Sean Dyche bristled at suggestions he had any insight into discussions, then pointed the finger for his side’s loss at match officials and noted the financial chasm between the two teams.

It’s easy to see why Dyche is upset.

Burnley spent £1 million in the summer on Dale Stephens. That’s it. Their only expenditure. You’d be hard-pressed to get a decent lunch in the capital for that amount, meanwhile, a club two years removed from qualifying for European competition is masquerading as a skint lower-league side. Worst Halloween costume ever.

Chairman Mike Garlick refuses to spend, Dyche is at wits end, and Burnley sit bottom of the league on one point. It’s their worst-ever start to a top-flight season. A team that was once a challenge to break down is now porous, and with a league joint-worst three goals scored, they’re placid at the other end. Relegation looms, and it’s a shame Dyche is unlikely to jump ship before it sinks. He deserves better.

Have Chelsea learned how to defend?

It’s not quite that simple, of course – we’re not too far removed from Chelsea conceding three times against Southampton at home – but recent performances have certainly been encouraging for Frank Lampard.

The Blues’ 3-0 win over Burnley on Saturday signaled the club’s fifth clean sheet in the last six matches across all competitions, and while it’s not all down to Edouard Mendy, it’s impossible to deny that the team, as a whole, looks more comfortable with Kepa Arrizabalaga planted on the bench. The Spaniard’s confidence was completely shot, and his unease between the sticks was rippling throughout the team, particularly the defenders.

Mendy, who missed that aforementioned clash with the Saints, has come in and immediately provided a calming presence for a team that looked hopeless at the back earlier in the season.

With the caveat that, yes, they played a woeful Burnley team that appeared to have checked out, Chelsea seem to be on the right path toward striking a balance between their star-studded attack and defense.

Is Partey the answer to Arsenal’s problems?

One player can’t correct years of mismanagement and poor recruitment policies, but don’t tell that to Thomas Partey.

The £45-million addition from Atletico Madrid was both a ball-winning bulldozer and a balletic distributor against Manchester United, pairing with Mohamed Elneny to completely outclass the Red Devils’ midfield in Arsenal’s 1-0 win.

Partey won possession a match-high 11 times, had a team-high 79 touches, recorded three successful dribbles, and completed 93% of his passes – the highest mark on the day. And there were shades of Gunners legend Patrick Vieira in Partey’s dominant performance, as the Ghanaian danced with the ball and bounced off opponents for pleasure while showing glimpses of a box-to-box pedigree.

Partey might not be the answer to all of Arsenal’s long-standing problems, but he sure as hell is a step in the right direction.

It wasn’t that long ago Paul Pogba’s erratic displays were excused as the Frenchman toiled as the sole bright light in a Manchester United midfield flooded with average players. Now, he’s surrounded by skilled technicians Bruno Fernandes and Donny van de Beek, and merchants of graft Fred and Scott McTominay.

Pogba is still beset by the same mercurial performances as before. Drops in form are acceptable and expected, but against Arsenal, he was poor. Before the interval, he was outworked by Partey and Elneny, and other than a 15-minute spell after the break where he showed impetus on the left side of a midfield diamond, Pogba didn’t seem to fit.

He rarely speaks to the press after matches, but on Sunday, the 27-year-old took the blame for the defeat. Full credit to him, but that will do little to diminish questions about his inconsistent play.

Perhaps it’s time United strongly consider the talented World Cup winner’s role in the starting XI, and Solskjaer might not be around long enough to make that decision.