Team of the tournament: Best XI at Euro 2020 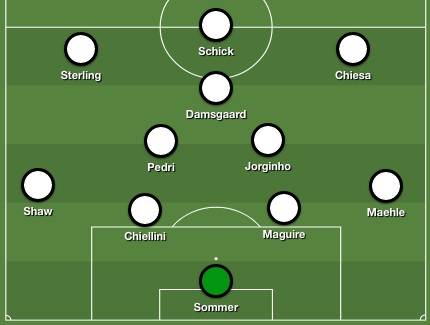 No goalkeeper was more pivotal to their team’s Euro 2020 success than Yann Sommer. Despite failing to register a single clean sheet, Switzerland’s magical run to the last eight doesn’t happen without Sommer’s clutch saves.

After denying Kylian Mbappe’s penalty to help the Swiss upset tournament favorites France, Sommer almost slew another giant in the quarterfinals. But despite his record-breaking 10 saves, Switzerland’s remarkable journey ended with a heartbreaking defeat against Spain.

Luke Shaw edges Kyle Walker and takes his England teammate’s spot – and forces a full-back flip in our lineup – courtesy of a sensational Euro 2020 capped by his volley inside of two minutes in the final versus Italy. It was the quickest goal scored in a European Championship final.

It was a redemptive month of international football for a player who’s faced career-ending injury and the public denunciation of a former club manager at Manchester United. Shaw also recorded three assists, the second-highest haul at the tournament. Somewhere, Jose Mourinho is feasting on humble pie.

Harry Maguire did a remarkable job making up for lost time after missing the opening two games due to injury. The Three Lions didn’t concede a goal from open play until the 67th minute of Sunday’s finale with the 28-year-old at the heart of their defense.

The Manchester United captain’s standout play re-established him as a world-class defender and helped England reach its first tournament final in 55 years, and his goal seconds after the interval in the quarterfinal win over Ukraine triggered the tournament’s most one-sided affair.

Giorgio Chiellini showed he has plenty left in the tank after helping to shut down some of the world’s top forwards during Italy’s memorable Euro 2020 campaign, notably making numerous interventions just as England threatened to turn the screw in the early stages of Sunday’s final.

The art of defending never looked so sweet, as Chiellini and partner in crime Leonardo Bonucci provided Italy the freedom to push up the pitch knowing that two of the world’s best center-backs were still performing at the top of their games.

After losing talismanic creator Christian Eriksen and their first two contests, Denmark battled back to book a shock semifinal spot in large part due to an attack reliant on the penetrative efforts of Joakim Maehle.

Maehle bagged goals against Russia and Wales, and he had one of the tournament’s best assists – a precise curling ball struck with the outside of his right foot – on Kasper Dolberg’s eventual match-winner versus the Czech Republic. In a tournament with strong full-back and wing-back play, Maehle stood out.

There’s a reason Italy midfielder Jorginho has earned the moniker “Radio” from his Azzurri mates. The 29-year-old Champions League winner has swiftly become Roberto Mancini’s on-pitch instrument of organization, and was key to their performance against England despite picking up an early knock.

Jorginho, whose virtually faultless display against Belgium was one of the tournament’s best individual performances, led all midfielders in completed passes (495) and recoveries (46) at Euro 2020 while governing the tempo of Italy’s efforts. Could Jorginho be a long-shot shout for Ballon d’Or?

If Spain’s semifinal defeat to Italy is any indication, La Roja may have found Andres Iniesta’s heir apparent in the form of 18-year-old midfield whiz Pedri. He completed 65 of 67 passes on the night, a third more than any Italy player, after not misplaying a single ball in the opening 90 minutes.

That performance capped a dominant tournament for Pedri, who led all players for completed passes in the final third (177) and distance covered per match (12.7). He also chipped in elsewhere with 25 successful duels, 11 chances created, and seven tackles. A truly generational talent.

Defenders at Euro 2020 had their hands full whenever Federico Chiesa was on the pitch. Appearing in his first major tournament, the 23-year-old evolved into one of Mancini’s most important players after a series of fearless performances.

Chiesa, who started just one of Italy’s group-stage matches, was virtually undroppable in the knockout rounds. After coming off the bench against Austria to score a stunning winner in the round of 16, the Juventus star was at it again in the semifinals, unleashing a beautiful curling strike against Spain.

After Mikkel Damsgaard replaced Eriksen in the starting XI for the narrow defeat to Belgium, the Sampdoria attacker was Denmark’s best player during its 4-1 Russia romp, scoring a stellar opener as part of a dizzying dribbling display.

Damsgaard was a spark plug for a team that grew into the tournament at the same ascendancy as the boyish winger. Plus, his stunning free-kick in the semifinal against England – the first and only direct free-kick goal of Euro 2020 – was one of the tournament’s more intoxicating moments.

Raheem Sterling’s metamorphosis from scapegoat to national hero at Euro 2020 was nothing short of remarkable, especially after the Manchester City star was largely dropped by Pep Guardiola amid a dire run of form at the tail end of the domestic campaign.

Sterling has been England’s creative catalyst at Euro 2020, bagging three match-winners and providing a crafty assist for the Three Lions’ opener versus Ukraine. He also forced an own goal and penalty in the memorable 2-1 victory over Denmark.

Without Patrik Schick, the Czech Republic’s Euro 2020 campaign could’ve been an absolute disaster. Instead, the 25-year-old forward had the country partying like it was 1996 after almost singlehandedly guiding the Czechs to an unexpected run to the quarters.

Although his five goals weren’t enough to win the Golden Boot, Schick’s fan club undoubtedly grew after his otherworldly goal from the halfway line against Scotland in the Czech Republic’s opening game.