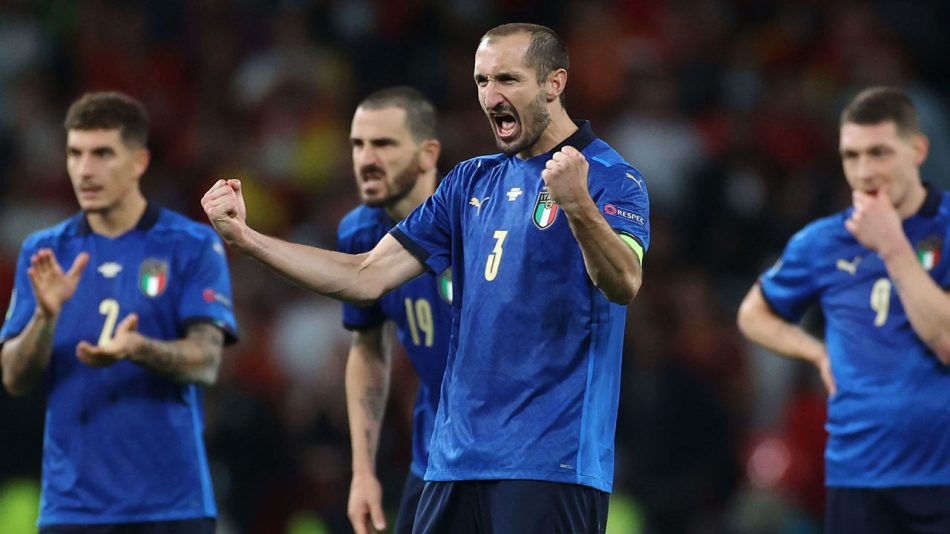 Get ready for the Euro 2020 final Sunday with theScore’s comprehensive preview. We examine the contest below, highlighting the key factors that will determine whether Italy or England hoists the trophy, and provide our prediction for the match.

For all their differences – the culture, the language, the constant one-upmanship – this year’s Euro 2020 finalists have a lot in common. Both teams can score goals, and both can defend when they need to. Each side has pace and players who can electrify on the wings. England and Italy may have never looked so similar on a football pitch.

Managers Gareth Southgate and Roberto Mancini parachuted in to rescue their national programs at two of their lowest points. Southgate took over England months after a humiliating loss to Iceland at Euro 2016, while Italy turned to Mancini after missing out on the 2018 World Cup. The Three Lions and Azzurri discovered new identities under the guidance of their new coaches, ushering a youthful core with an emphasis on attack-minded football.

And it’s been an overwhelming success.

“At the beginning, when he told us to have in our minds the idea of winning the Euro, we thought he was crazy. Instead, during these years, he has created a team which is now on the brink of doing that. And as he has repeated to us after every match: ‘One centimeter at a time.’ And now, there is only the last centimeter left.”

England is the betting favorite to win Sunday at Wembley Stadium, and with 19 wins in its last 20 home matches, it’s easier to understand why. But this has been a tournament of small margins, not a romp to the finish. The final should be no exception.

Raheem Sterling is a possible skeleton key. He’s factored into the majority of England’s goals in this tournament, and he’ll run straight at Italy’s back four for at least 90 minutes. Likewise, England’s defense, particularly left-back Luke Shaw, will have a tough assignment in Federico Chiesa, whose mazy, darting runs often wreak havoc in the final third.

Normally, Italy would have the edge in goal, with Gianluigi Donnarumma widely regarded as one of the world’s best goalkeepers. Jordan Pickford, England’s heavily scrutinized No. 1, isn’t even the best netminder in his own league. But the 27-year-old has inspired confidence with several decisive saves at Euro 2020, overcoming persistent criticism of his height disadvantage to set a national-team record for the longest shutout streak at 480 minutes.

The most interesting battle, then, will happen in midfield. England’s Kalvin Phillips and Declan Rice have significant risk tolerance and positional awareness – skills especially required in a two-man midfield like England’s. Phillips and Rice never looked out of place or unsure of themselves even when carrying yellow cards in the second half of England’s last-16 contest against Germany.

Italy operates with three midfielders who are just as capable of producing the perfect pass as they are a tough tackle. Nicolo Barella barks his way up and down the pitch like a watchdog while Marco Verratti, one of Europe’s coolest customers, and Jorginho recover possession in crucial areas of the pitch. Together, they’re a perfect blend of creativity and tenacity.

The Italians like to play quick passes down the middle – something England has struggled with all tournament. Given how difficult it will be to beat spry full-back Kyle Walker in a foot race or 6-3 center-back Harry Maguire in the area, the Azzurri will likely concentrate their energy in the middle of the park. If they can overload the midfield areas, they could come away with a famous victory.

Be too overzealous, and England’s rapid counterattack will strike back. And if Southgate’s side ends up with a lead, it could squeeze the life out of the game, as it did so masterfully in the final 10 minutes of extra time in Wednesday’s semifinal against Denmark.

“The players have learned a lot over the last three or four years. We talked to them about (running down the clock),” Southgate said, according to The Guardian’s David Hytner. “We used to talk to the under-21s about that – it was one of the biggest areas we had to improve upon – and we still can be better at it. But the players had worked it out, and they did that really well. We have got the technicians to be able to do it.”

Add it all up, and it’s hard to pick the standout champion. Seven of the 14 knockout ties in this tournament have already gone to extra time, so why not another?