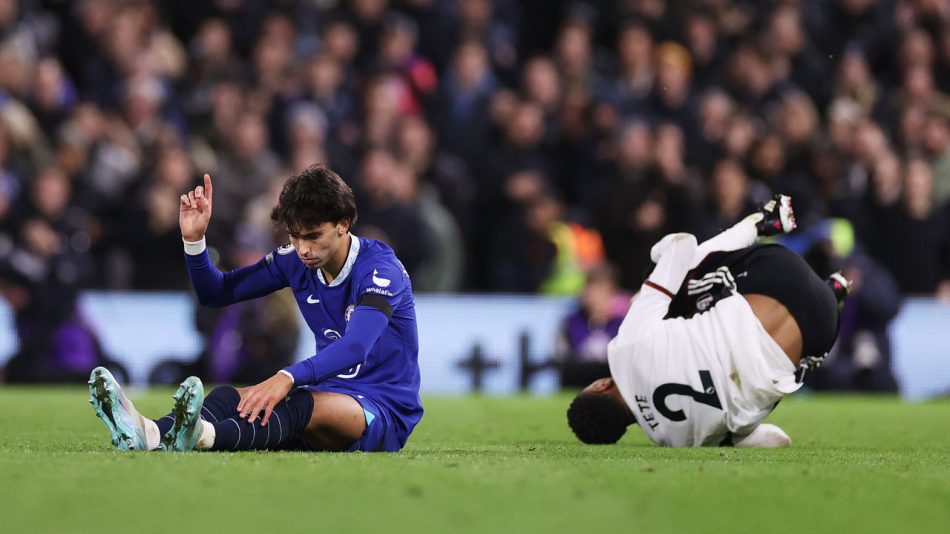 Joao Felix soured a promising Chelsea debut with a red card for a studs-up challenge during his new team’s 2-1 loss at Fulham on Thursday.

The attacker, who’s on loan with the Blues from Atletico Madrid, registered six shots and made numerous dangerous runs before he was sent off for an ugly lunge on Kenny Tete in the 58th minute. He’s the first player to be dismissed on his Premier League debut since Tottenham Hotspur’s Federico Fazio in October 2014.

The teams were tied 1-1 at Craven Cottage when Felix was given his marching orders.

Felix’s arrival from Spanish football was only confirmed Wednesday, and he was immediately thrust into Chelsea’s starting lineup. Numerous Chelsea players are sidelined, including attackers Raheem Sterling, Christian Pulisic, and Armando Broja.

Graham Potter’s side entered the fixture on a dour run of two victories in nine matches across all competitions, and their poor form continued against their nearby rivals.

Felix was lively in the opening half, but the visitors were 1-0 down at the break courtesy of a deflected effort from Willian. The 34-year-old winger represented Chelsea for seven seasons and is now enjoying a renaissance with Fulham after spells at Arsenal and Brazilian giants Corinthians.

The Blues entered the second period with renewed vigor and leveled when Kalidou Koulibaly stabbed the ball in from close range. But Chelsea’s belief receded when Felix slid at Tete.

Aleksandar Mitrovic, who has 11 goals over 15 top-flight games this term, was suspended, but his replacement, Carlos Vinicius, neatly filled the void with his first goal in his 11th Premier League outing of the season. Andreas Pereira lofted a cross into the box, and Vinicius easily escaped Trevoh Chalobah before heading the ball past Kepa Arrizabalaga.

Chelsea’s latest setback kept them in 10th place despite the club’s £261-million spending spree last summer. The club has already signed another four players this January.

“We have got to keep working. There is no other solution,” Potter told BT Sport post-match, according to BBC Sport. “You have to keep working together and try to get the three points.”

Felix is now set to miss Chelsea’s upcoming fixtures against Crystal Palace, Liverpool, and Fulham (again) while he serves a three-match ban. The Blues have scored the same amount of Premier League goals (21) as Manchester City’s Erling Haaland in this campaign.